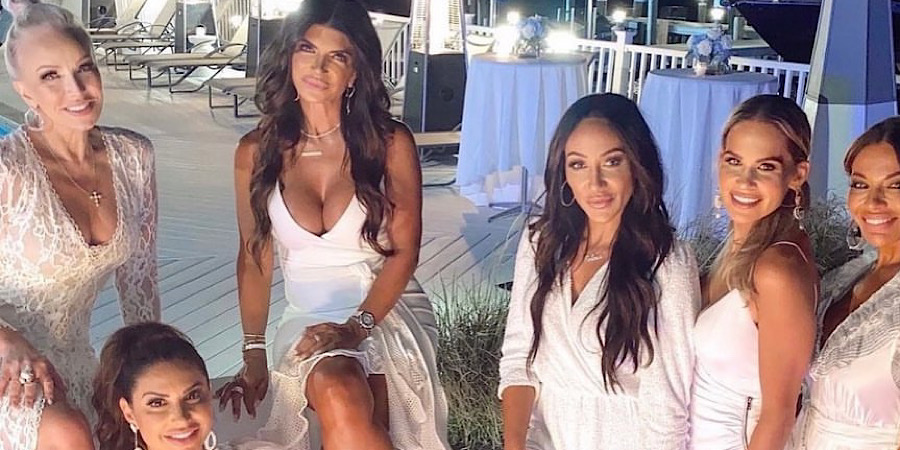 Last week on RHONJ, Teresa finally apologized to Evan and Jackie for disrupting their family. She never directly said what she was sorry for but it allowed everyone to get along at the Shore. Everyone spent the day on the water, eating and drinking. Unfortunately, Margaret and Jennifer got into it when Jen called Marge out for the way she talked to her husband. She felt it was embarrassing to yell at him in front of their friends. This is when Marge said Jen was a sloppy drunk. In turn, Jennifer brought up a confession Margaret told the ladies about sleeping with her older boss when she was a young executive. Marge called Bill Jen’s meal ticket and that’s where the show ended.

Tension and Drama on RHONJ

Jen is now mad at Margaret for her comments and vice versa. At Melissa’s Shore house, Marge is recounting what happened with Jennifer. It doesn’t much matter because they will all be meeting up for dinner at a restaurant soon. The guys sit at one table and the ladies another. Joe and Melissa have some tension between each other but no one can figure out why. The guys are taking shots and Melissa comments they should send over drinks to them, as well. He says they are independent so they are fine on their own and then he references Lake George.

That was when Teresa and the ladies (sans Jackie) pranked Joe and claimed Melissa was flirting with a restaurant owner. Joe knows how she flirts and he has not let that go. Teresa believes there must be trouble in paradise for him to bring it up again. The ladies start to give Teresa dating advice and Dolores says pay attention to red flags. Jen says one is cursing at each other. Marge jumps in and asks if her swearing at Joe is a red flag. She says it is.

The men tell Joe B. that Marge basically wears the pants in the marriage but he says it works. Margaret tells Jennifer she likes to be at home and aspires to be a housewife. Jackie has to be sympathetic to her because she did stay at home for a long time with her kids. Marge sleeping with her boss comes up again but she says it is in her book so it’ll be public knowledge. The guys realize it is time to gather and go. Everyone has to try to rectify their issues because the following evening is the memorial for Joe and Teresa’s father.

Cracks In Melissa and Joe’s Marriage on RHONJ

Melissa starts walking to the car before Joe and he gets mad. She says she is the host so she feels she needs to lead the way. He asks if she had too much to drink but this leads to more frustration. She acknowledges her independence and success have caused a divide. Now that her boutique is super successful, she must go to fashion week and make appearances. Melissa cannot be at home to cook meals for him and have dinner on the table. She feels he is extremely spoiled and she is over it.

Melissa welcomes Joe’s devotion to family at the beginning because of her upbringing. However, she changed and evolved as a businesswoman and does not feel she should apologize for her success. Outside, Joe is talking like the marriage is over but the men say he needs to stop and go be with his wife. Once he is upstairs, she reminds him she is not the twenty-four-year-old he initially fell in love with anymore.

The next morning, Melissa goes on a bike ride because she and Joe had not spoken all night. She thinks the fresh air on the Shore will be super therapeutic for her. Melissa orders food for everyone to be delivered and Joe apologizes to everyone for his behavior. The food arrives and soon, her kids come with the au pair. When she wanted to work more, Joe arranged for them to have more help so he feels he is doing all he can. Is it enough?

The RHONJ Fam Has A Boat Day and Nonno’s Memorial

Everyone goes for a boat day to grab lunch. While they are out there, Joe’s phone won’t stop ringing. He gets up and Melissa sees it is someone named Giselle who is a realtor. Eventually, she tries to pick it up but no one is there. She starts to become suspicious of this person and the continuous phone calls. When he returns, Melissa calls him out and says she knows it is a prank and he is getting her back for Lake George. Footage shows him and the guys conspiring together.

He changed Frank Catania’s number to say Realtor Giselle and Frank proceeded to call him repeatedly. Unfortunately, Melissa is too quick for their games and it was a fail. This made Joe happy because it made him see how much Melissa does love him. Time to get back to the house for Nonno’s memorial. Evan leaves while the kids are all arriving, including Frankie.

Two swans keep arriving at the dock and they believe that’s Teresa and Joe’s parents. Bill and Jen gift Melissa and Joe with an oil painting of his parents. Gia reads the emotional eulogy she gave at the funeral and everyone has such fond memories of Nonno. They give a shot/toast to him and it really is a celebration of an amazing man. Next week on RHONJ, the ladies see a psychic and she tells Teresa she sees love for her. Melissa tells Joe there is a new stage of life for them. Something makes Dolores break down and Jennifer’s parents are more distant than ever. Watch it Wednesday nights at 9 pm only on Bravo.

Would Michael Allio Accept An Offer To Be ‘The Bachelor’ Next Season?
Michelle Young’s ‘Bachelorette’ Cast Revealed!
WOAH!! Lindsie Chrisley Stepping Into Savannah’s Territory?
‘DWTS’ Pro Gleb Savchenko Has Some Exciting News — What Is It?
‘You, Me, And My Ex’ Alex Hines STILL Defending Relationship With Caroline