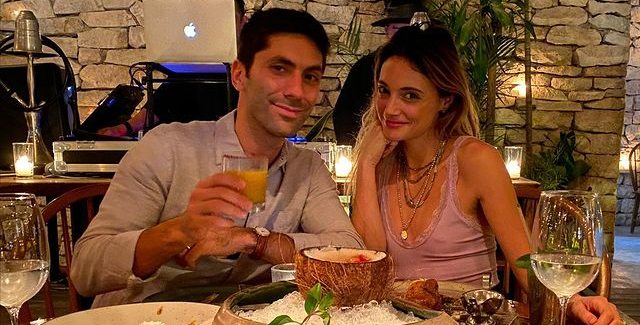 Back in November, Nev Schulman said he would really like to have another child after finishing his run on Dancing With The Stars. It looks like the Catfish host finally got his wish!

Nev made a cute Instagram post to announce that he and his wife Laura Perlongo are expecting another child. The couple married in 2017 and are the parents of Cleo, 4, and Beau, 2. But now, they’re more than happy to add another bundle of joy into that mix.

“WE’RE PREGNANT!!! 🥰🤯🤪 #3 #HatTrick 📸: @arnold_daniel,” he captioned the image. In the photo, you can see Laura with her shirt pulled up slightly, revealing the bump. Nev, Cleo, and Beau all have their shirts pulled up too.

We’re not yet sure how far along Laura is. However, it’s entirely possible they started trying for a third child as soon as Dancing With The Stars finished up. Nev told Us Weekly just before the finale, “I’m excited to start trying for baby No. 3 myself. Now’s the time!”

One thing is certain — this child is already very loved and will have a great time growing up in this fun-loving family.

Around Beau’s first birthday in 2020, Nev revealed they were already making plans for the third child. In other words, these plans have been in the works for a while.

“There’s a plan for a third, for sure,” Nev told Us Weekly at the time. “Nothing’s baking [but] I was one of two and [Laura] was one of three, and she loved having two siblings and still does. So I’m into three. I think that’s the number.”

Do you think three really is the magic number, or will Nev and Laura catch baby fever and try for even more? Be sure to let us know what you think in the comments.

During his time on Dancing With The Stars, Nev Schulman actually revealed he and his wife had COVID-19 before taping.

“It was really scary as there was so little information available and we were terrified that our kids would get sick too,” Nev told ET. “For over three weeks, my constant fatigue, headaches and difficulty breathing was awful and the stress of wondering if my symptoms would worsen was horrifying.”

But by summertime, he was able to work out again. He did end up getting Covid toes, which is a weird symptom of the virus. Fortunately, he doesn’t think it impacted his dancing abilities. He and his professional dance partner Jenna Johnson went on to take second place during the DWTS season. Even though he did get pretty sick, he’s mostly just grateful he and his wife survived.

“Despite the tragedy of COVID, of course, in this pandemic, not filming Catfish on the road oddly opened up an opportunity for me to be in one place and be on the show. I am so grateful, and I just feel like that was something I wanted to share,” Nev continued.

Did you enjoy watching Nev on DWTS last year? Are you excited for their family? Be sure to let us know what you think in the comments. We love hearing what you have to say.