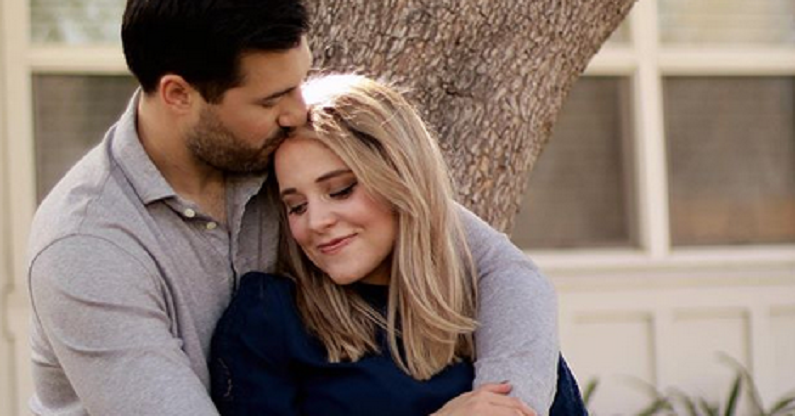 Jinger Duggar Vuolo took to her Instagram account on Wednesday evening to tease BIG NEWS. The mysterious post featured a picture of Jinger with her husband Jeremy Vuolo standing behind her. He had her wrapped in a very loving embrace. They both had huge smiles on their faces. Unfortunately, the text on the picture proved to be even more of a tease as the BIG NEWS would not be revealed until sometime the following day.

The teasing photo has been liked over 40,000 times and accumulated over 1,000 comments inside of 10 hours. So, it should be no surprise that fan theories have begun on what this big need could be.

Now, there are only really two kinds of “big news” that comes up regularly in the Duggar family. And, since Jinger is already happily married… Counting On fans had no choice but to rush toward pregnancy rumors and speculations. Could Jinger and Jeremy be pregnant?

The photo of the duo teasing the “big news” certainly looked like it could be a pregnancy announcement or a baby bump picture. They both had huge smiles on their faces. And, they were perfectly positioned in a way that would have them both holding her stomach for the camera. So, could the big news be that Jinger is pregnant?

Fans Feud Over The Potential Bun In The Oven

Many fans were quick to “vote” in the comments of her Instagram that she might be the imposter. Some of her followers, however, were not amused by the pregnancy speculation. In fact, they slammed the pregnancy theories. They noted Jinger Duggar Vuolo does a lot more than just have babies. These individuals had other theories:

Either way, many of her fans doubled down on the fact that she has more to offer than just her womb.

Could The Big News Be Pregnancy-Related?

A closer inspection of the picture on the post reveals it looks like the cover of their new book. Their new book is currently available for pre-order on Amazon. It will be released next month. So, those wondering if the news could have to do with their book might be spot on their theory.

Moreover, it has only been about five months since Jinger gave birth to her second child back in November. Now, this means it is possible for her to be pregnant again already. But, it is also awfully soon at the same time. If she is pregnant, many fans will wonder if her body has had enough time to heal.

Unfortunately, Thursday is here and the couple has yet to spill the big news on Instagram. But, we’ll keep you posted as we learn more!

Update: Jinger and Jeremy have now shared their announcement. Click here to find out what it is.

Do you think Jinger Duggar Vuolo’s big news could be pregnancy? Would she have another child so soon? Or, do you think this big news is related to her book? Share your thoughts in the comments.