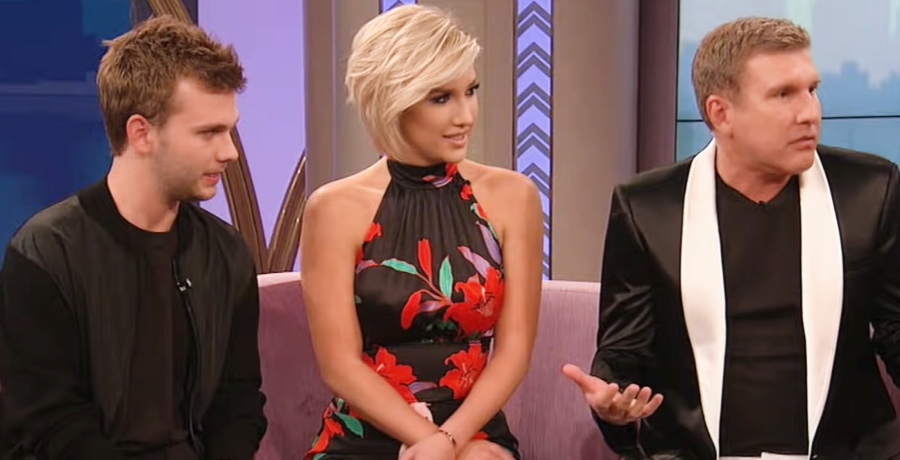 A Chrisley wedding happened recently and it appears to have been a secret, intimate ceremony between just the groom and bride. Wondering which of Todd Chrisley’s children officially said: “I Do?” Keep reading and we’ll share all the details we have on this very intimate moment within the family.

Technically, only one of Todd Chrisley’s children were engaged

There have been a lot of rumors that Chase Chrisley and his girlfriend Emmy Medders are engaged. These rooms stem from a family ring she wears on her ring finger. Many Chrisley fans note the wedding, marriage, and engagement rumors would cease if she just wore the ring on a different finger. Chase and Emmy, however, are always quick to remind fans the ring is just a piece of jewelry that means a great deal to the Medders’ family. It has nothing to do with Chase.

Moreover, there is the simple fact that Julie Chrisley does not really want to see her son get married just yet. Now, before you freak out… Her feelings have nothing to do with Emmy. It appears as if she and Todd have welcomed Emmy into the family with open arms. Emmy doted on how important Todd to her on his birthday. Likewise, she revealed how intertwined her family and Chase’s family have become. So, most assume it is only a matter of time before Chase and Emmy tie the knot.

Kyle Chrisley Is ‘Amazing’ With His Future Bride Ashleigh’s Children

So, what about Savannah Chrisley? Well, as far as fans know, Savannah Chrisley is not in a relationship with anyone at the moment. Most hope there is still a future for her and her ex-boyfriend Nic Kerdiles. Some even speculated Todd was trying to get Nic and Savannah back together. Others, however, think Todd needs to butt out of his children’s relationships.

A Chrisley wedding did happen, but who was it?

According to an exclusive by People Magazine, Kyle and Ashleigh Nelson officially got their marriage license on March 29th in St. Johns County. The secret Chrisley wedding happened a day after on March 30 in St. Augustine, Florida. The outlet also notes the marriage certificate reveals there were no witnesses at the wedding ceremony. So, if you are wondering whether Todd Chrisley attended Kyle’s wedding… The answer is no. This, however, doesn’t mean Kyle did not have some kind of celebration after the ceremony that his father Todd Chrisley was a part of. We just don’t have that kind of information.

Ashleigh admits to the outlet she’s known she wanted to marry Kyle since she met him. She continued to explain it is hard to know anyone in the Chrisley family without loving them.

For now, Todd and Julie Chrisley have not made a public statement on the wedding. People Magazine did reach out to a representative for the family who has yet to respond. Kyle nor Ashleigh have posted anything about their wedding or marriage on Instagram as of yet.

How do you feel knowing Kyle Chrisley is a married man? Are you surprised this Chrisley wedding was a secret ceremony? Do you think they will post about it on social media? Share your thoughts in the comments.