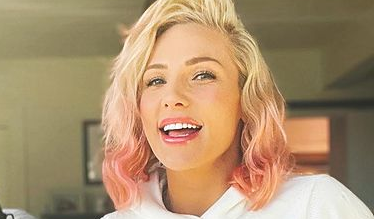 Dancing With The Stars pro Sharna Burgess and actor Brian Austin Green are in a relationship these days. Her castmate Keo Motsepe recently sat down with Us Weekly to say how glad he is that she found someone.

“I haven’t seen Sharna in a while, but when I saw her, she was happy. She just had this glow about her. And I was like, ‘I’m generally so happy for you,’” the 31-year-old dancer told the publication.

Keo Motsepe just ended his relationship with Selling Sunset star Chrishell Stause in February, but it’s really refreshing to see he still believes in love. He hopes to find someone special someday and become a father. But for now, he’s just really happy for his friends and castmates as they pursue their own relationships.

Back in December, Sharna Burgess teased news outlets and said that she met someone special. At the time, she wasn’t willing to say much about her new relationship. But around the holidays, fans spotted her at an airport with actor Brian Austin Green. If you aren’t already familiar with him, you may recognize him from The Masked Dancer.

Through some careful Instagram snooping, fans quickly concluded the two were staying at the same Hawaiian resort together. Even though photographers caught them smooching, they wouldn’t address their relationship until a few weeks later.

Since then, Sharna and her new man seemed really focused on making their relationship grow. She met his children and really appreciates the way he and his ex-wife Megan Fox co-parent.

“I think they’re doing a great job with managing their situation, so I’m grateful that I’ve been able to fit into it — into their world,” Sharna told Australia’s The Morning Show.

And when Valentine’s Day came around, the dancer had plenty of kind things to say about Brian Austin Green. She also encouraged fans to keep going, even if they were feeling a little down these days.

“For all my single humans heading into Valentine’s Day tomorrow… This ones [sic] for you. I know I know… the day can really suck can’t it. But it doesn’t have to! Even though this year is beautifully different for me, I appreciate, remember and know how V day can feel especially if you’ve simply decided it sucks,” she wrote.

Are you happy for Sharna Burgess and Brian Austin Green? Many fans believe Keo is right — Sharna really does seem happier these days. Have you noticed the “glow” Keo mentioned? Be sure to let us know in the comments.

Pete Davidson Prepared To Be Step Daddy Of Kim Kardashian’s Kids?
‘RHOBH’: Kyle Richards Reveals When She Will Leave The Show
JaMarcus Russell’s 2021 Net Worth Revealed
‘General Hospital’ Weekly Spoilers: Will Jason Morgan Survive?
JoJo Siwa On Letting Her Hair Down And Her New, Adult Look