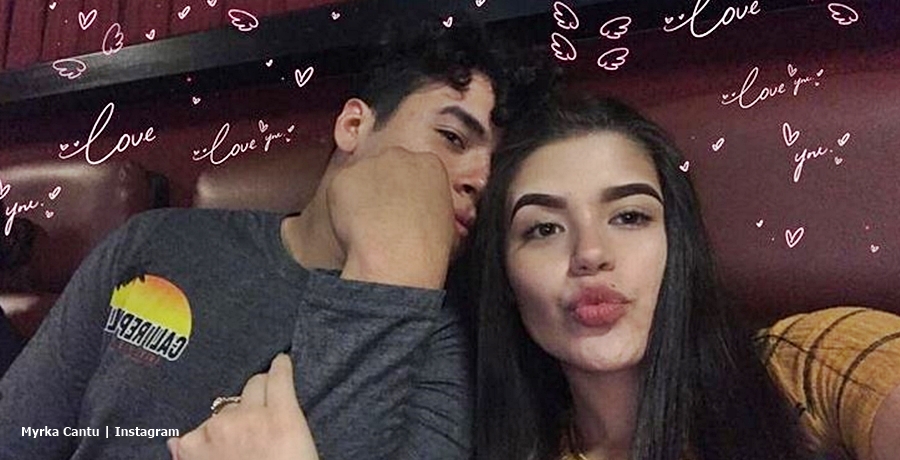 Myrka Cantu’s baby photos seldom appear on social media. In fact, they seem so scarce as the Unexpected star wants to keep her daughter Attalie safe. Actually, until recently, fans didn’t even know the name of her baby. So, fans who just found out, love it. This week, a few photos emerged and TLC fans gushed over how Attalie is the spitting image of her mom.

We reported that fans really hoped that Myrka would share photos of her baby once the episodes covered the birth. Or alternatively, at the end of the season. However, fans didn’t really hold out much hope. After all, she made a lot of fuss about one photo leaking via a family member. Plus, a fan who asked her during an Instagram Live about de-archiving photos, received a negative response.

At the time, Myrka talked about some “disturbing messages.” Therefore, Myrka Cantu’s baby would be kept very private as she worried about her safety. Additionally, the Unexpected star thought it rather strange that people just want to show too much “curiosity.” In the first week of March, it looked like the young mom caved to pressure and she shared two photos. They came via her Instagram Stories and not with a lot of good grace.

The old photos came captioned with, “Bro, I literally posted one picture. Doesn’t give y’all the right to post like a million pictures of my child.” And the next one noted, “I mean since it’s already posted everywhere.”

On both April 5 and, April 6, Myrka Cantu’s baby photos came in two batches. Actually, they seemed like an Easter surprise. Maybe as fans stopped pestering her so much, Ethan Ybarra and Myrka decided on a small reward. Thrilled Unexpected fans quickly shared their reactions to the ones posted on Tuesday night. One fan loved the name “Attalie” as their daughter has the same name, only spelled with one “t.” Meanwhile, fans poured out comments on the likeness between Myka and her daughter.

She’s got your dimples!”

She’s so cute! Your twin! Same lip shape and everything 😍.”

Many other TLC fans gushed about how Myrka Cantu’s baby Attalie looks “gorgeous” and “adorable.”

TLC fans also love that Myrka and Ethan seem so close. Of course, they also arrived on the show with some drama. However, that’s just usual with Unexpected. Recall, Liliana, Myrka’s mom threw her out. And later, Ethan revealed that they ended up booted out of his own mom’s place. The Cinemaholic notes that “ever since getting kicked out of Ethan’s mother’s house, the couple lives with Myrka’s ‘papa.” Plus, they study and Ethan works to help support his wife and child.

What did you think of the surprise photos of Myrka Cantu’s baby, Attalie? Do you agree that she’s the spitting image of her mom? Sound off in the comments below.

Cassie Randolph Shocked By Colton Underwood Reveal, What Does She Think?
‘Married at First Sight’ Jamie Otis Talked With The Dead
’90 Day Fiance’ Star Paola Gets Her Citizenship
Frustrated Fans Are Over Danielle Busby & Here’s Why
Why ‘Sister Wives’ Robyn Brown Sad For Christine?