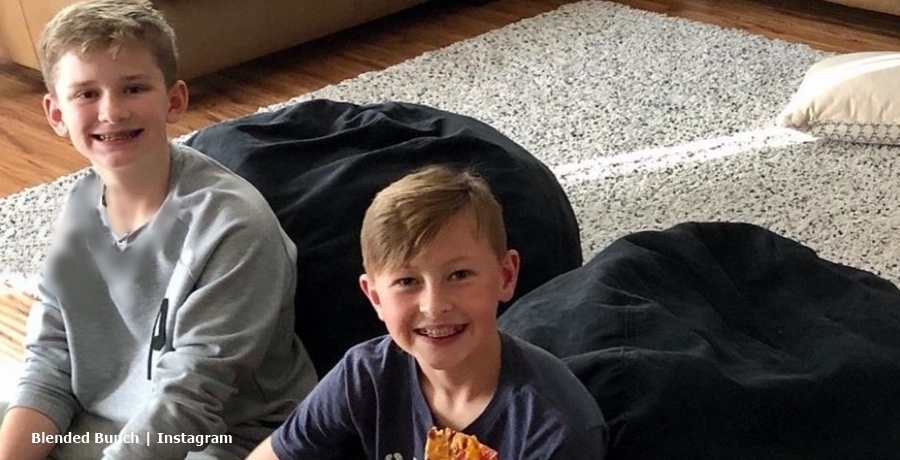 The Blended Bunch boys, Landon and Brayden are not related by blood. However, they get along fine and the two oldest boys seem like nice kids, fans agree. Both kids were 12 when the TLC show premiered and Landon’s the oldest of the 11 kids. His birthday comes in April, so Brayden’s not far behind him. Now, both boys get their very first phones. So, what brand did the family choose for them? Read on to find out.

If you don’t know, Landon’s the eldest son of Erica and Tony Means. Meanwhile, Brayden, the same age, came from the union between Aimee and Spencer Shemwell. After Aimee and Tony died, Erica and Spencer met via a widow’s support group. Now married, they all live as one big family. With 11 kids, it’s a big job for Erica who looks after the kids while Spencer runs his own company. If you’re still not sure which by is which, you might recall the scene where one of the boys cried his eyes out over his mom Aimee. That was Brayden.

The Blended Bunch boys seem like twins these days. However, for Brayden, his different bloodline means he doesn’t suffer from  Li-Fraumeni syndrome. People Magazine reminded viewers that Landon Means, Emma, Sophie, and Caleb all inherited the rare condition from their dad Tony. The syndrome brings extremely high risks of the kids later getting cancer. Additionally, many of their relatives already passed away from the illness. So, Erica picks up some critics for having so many kids.

On Monday, April 5, Landon and Brayden seemed thrilled about their first phones. So, Landon probably spends his time enjoying the new accessory instead of worrying about his health condition.

What brand of phone did the family choose for the older boys?

Taking to his Instagram, Spencer Shemwell shared about The Blended Bunch boys and their very first phones. There, the TLC dad revealed the brand of choice and also shouted out their phones in a promo. Possibly, the lucky boys got them for free as part of the promo? In any event, they look more than happy with them. Spencer revealed that they both got Gabb phones. Deemed as safe starter-phones, for kids, they come with 14 apps. According to their FAQ page these include “music, phone, messaging,” and “contacts.” Additionally, it gives kids a “camera, video, gallery, calendar, calculator, clock, voice recorder, FM radio, and file manager.”

The Blended Bunch boys can enjoy all of those apps. Actually, parents like them as they come without the Internet and other game access. Mainly useful for communicating via phone and text, it keeps them safe from the sometimes shady content on the internet. In the comments section, a TLC fan gave a good review of the product. However, the phones only work with Gabb’s own wireless service.

What do you think about The Blended Bunch boys getting Gabb phones? Do you think the safety features seem like a good idea? Sound off in the comments below.