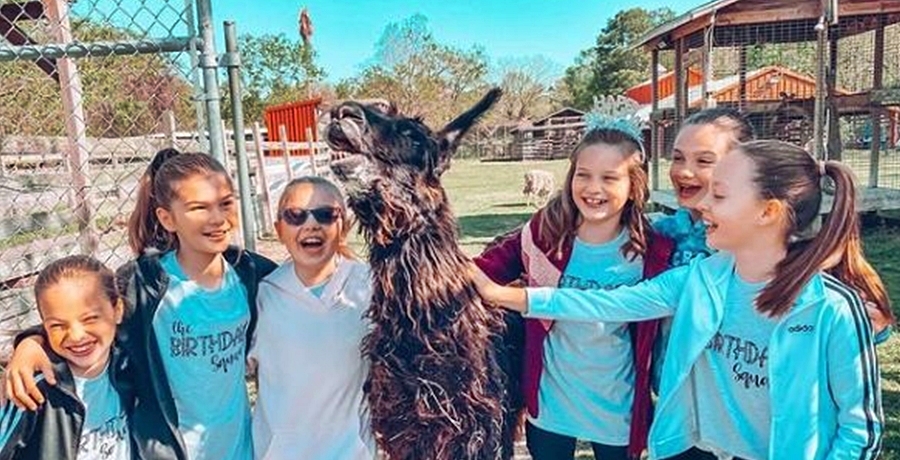 Blayke Busby’s birthday celebrations ran from the end of March until April 5. The OutDaughtered family from TLC made a huge effort and Danielle feels no guilt for spoiling her daughter. After all, she hit double digits and now she’s ten years old. While four or five days of partying and fun sounds excessive, it seems her mom enjoyed the special festivities as much as Blayke. On April 5, the family celebrated with one final blowout festivity.

Fans of TLC might wonder what plans Adam and Danielle come up with for the quints who will turn 10 in four years’ time. Actually, expect more birthday festivities in the coming week, as the quints turn six on April 8. Well, if Blayke ever felt left out with all the TV focus on her sisters, that probably just evaporated. Danielle told fans that they started planning early, and it would take days for all the fun to go down. Certainly, the prediction came through as it started just ahead of Easter. The final blowout festivity took place on Monday.

Blayke Busby’s birthday celebrations included a sleepover with cousins and friends. In fact, some people thought they possibly did that at a hotel. Plus, the girls all went for full facials. While Adam babysat the quints, Danielle took the birthday guests and Blayke to interact with some animals. That’s something fans know that the eldest daughter adores. Later, fans saw that quite a lot of guests arrived at the Busbys’ house for Easter Sunday. It seems that the celebrations incorporated Blayke’s friends and party guests. Danielle told her fans she took a lot of videos and photos. So, expect some new content for their It’s A Buzz World vlog.

Actually, the birthday took so many days of celebrations, that Adam Busby might make several videos and bring out a mini-series for OutDaughtered fans.

Blayke Busby’s birthday festivities finally concluded and Adam shared the news on his Instagram on Monday night. He revealed a photo of Blayke with a birthday cake. The family gathered around, and Riley squeezed into the picture. He captioned his post with, “The big 1️⃣0️⃣‼️Ended the day with family, presents and CAKE!” Meanwhile, on her post an hour later, Danielle told fans that Blayke chose her cake. Unsurprisingly, as she loves animals she chose a “jungle-themed” one.

Between all the photos shared during Blayke Busby’s birthday celebrations, it’s not clear how many fans wished the Busby daughter a happy birthday. However, it probably runs to thousand of best wishes going her way. Certainly, the chances that Blayke might ever forget turning 10 years old seem very slim.

What are your thoughts about Blayke Busby’s birthday celebrations lasting for days? Do you agree that after days of partying she probably enjoyed eating cake and opening presents with her family in the final festivity? Sound off in the comments below.

Netflix Original Series ‘Echoes’ From The Man Behind ’13 Reasons Why’
Kaitlyn Bristowe Chooses Sides: Is She #TeamKatie or #TeamGreg?
Kim Kardashian Chases ’More Elevated’ Promise With Sexy Lingerie Snaps
Fans Speculate: What Caused Todd Chrisley’s Scowl In THIS Photo?
Did Ariana Madix Change Her Stance On Having Kids?