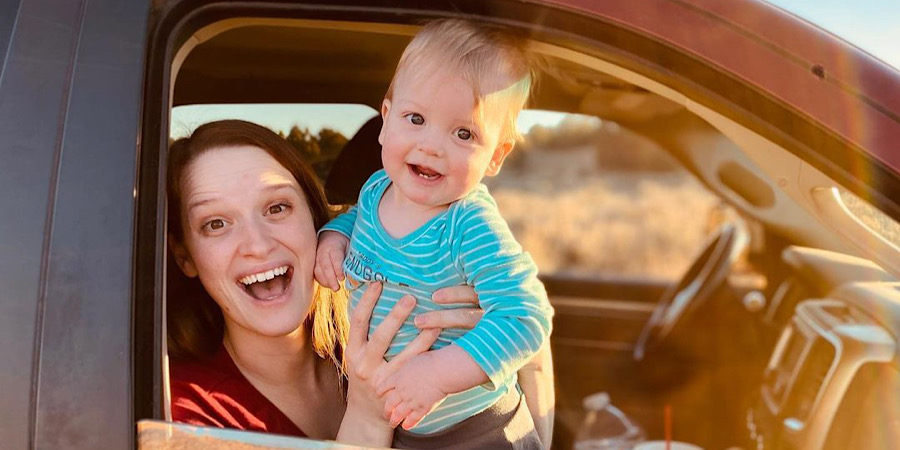 Last week on Seeking Sister Wife, Tosha opened up to her mom about her plural lifestyle. However, her mother already knew via the family grapevine. She was more concerned Tosha was in a cult over anything else. Christeline arrived from South Africa to stay with the Snowdens for five days. Ashley was taken aback when she learned Christeline does not cook but was happy she does laundry. The Merrifields took action in court for their divorce so they can start the K-1 visa process for Roberta. Yet, her family is still very leery about the dramatic steps they have chosen to take. Finally, Kaleh is still not living with Vanessa and Jarod though she is working towards moving back in. It has been a month and Vanessa has told her if she comes back, she must remain committed.

Christeline Connects With the Snowdens on Seeking Sister Wife

Though her trip to California is short, Christeline has packed a lot into the time she has had. The family took her hiking and to the beach. She spent some one-on-one time with Ashley at a crystal shop and got to know Dimitri on a deeper level. Of course, there could be no intimacy between the two of them this time around as they are just courting.

Dimitri has always said he wanted to build a kingdom with more wives and more children. He can see that happening whilst Christeline cradles his kin. As the three of them are talking about communication, Dimitri is going through photos from the week on his phone. Christeline asks if he has sent any of them to Tayler and a producer asks who that is. She is a 29-year-old Henna artist from Georgia whom they are also courting. It is also her first polygamous relationship but she has yet to meet the Snowdens in person.

They met her online a few months after Christeline and everyone knows about each other so there are no secrets. Christeline really likes Tayler’s energy and they actually speak every day. She is hopeful this will last because she is very happy with it thus far. The Snowdens and Christeline video chat Tayler together for the first time. However, Tayler is much like Vanessa as she has no kids and is a completely single woman. She cannot wait to meet the kids and be around them saying this is something she wanted for a while. Tayler was the girl who chased the attached guys in high school so plural marriage is perfect for her. Hopefully, they will all mesh in person.

The Merrifield’s Head to Mexico

Garrick and Dannielle are officially divorced so they are headed to Mexico to see their future sister-wife, Roberta. It has been a year since they first met in person in Mexico. On that trip, Roberta’s mother came to help with the Merrifield’s two boys. On the second night, Garrick proposed to Roberta but this time, it is just the three of them. Dannielle believes it will give her a chance to have some sister time while Garrick will spend every night in Roberta’s bed.

Once Roberta’s Visa is approved, they will have ninety days to get married so venues will be looked at. Dannielle’s family still thinks this whole situation is insane. When she finally sees Roberta at the hotel, they run to one another, and soon, they all embrace and kiss. They refer to her as the tiny wife because she is petite and Dannielle as the large wife. She explains she was in publicity school and they were talking about Mormons. In those women, she could see herself and that is how Roberta found herself in this lifestyle.

Roberta feels bad there had to be a divorce to bring her into the marriage. She does not want Dannielle to ever feel left out. It is hard for Dannielle to see her “husband” embracing and touching Roberta because he only texts her back home. She does worry this may make for an uncomfortable and jealous situation.

Last season, the Winder family was seeking a sister wife. Yet, they were also seeking acceptance from their community and coming out as plural. Colton is married to Tami and they have a daughter, Sadie and his second wife is Sophie. Unfortunately, finding a third wife was not so easy and Sophie was living separately from Colton, Tami, and Sadie. Now, she is seven months pregnant with a boy after trying for a long time. It took a while for Tami to accept it but now she is very happy though not nearly as excited as Sadie.

Their religion believes plural marriage brings them closer to God and their lifestyle was a felony. Now, it is more like getting a traffic ticket so they can live together instead of two homes. Sophie is upstairs and has her own living space while Tami is downstairs. Privacy is key so they cannot hear each other being intimate but living together is a whole new world. Regardless of the changes in their life, the family still would like to add another wife. Enter Kimberley, a thirty-year-old from North Carolina.

She found them on their social media and has a daughter close to Sadie’s age. They believe she is the most promising person since Sophie. The timing may not be great but God brings you the person when he deems proper. They are going to ask her to come to visit, something they have never done.

The Joneses Get Their Groove Back…Maybe

Tosha and Sidian have been on their own for about four years now. Their sister-wife, Sidian’s first wife, left the family when she realized she was no longer comfortable with it. It took them about three years to fully recover from the abandonment. About a year ago, they made the decision they were ready to start looking again so they are at a bar. Online dating is not really for them since they met in person and know other couples have, as well. Tosha asks Sidian if he has his polygamous pick-up lines ready.

When it comes to Sidian’s ideal sister-wife, he wants someone independent, attractive, and with high emotional intelligence. Tosha just wants someone who benefits the family as a whole. He really is feeling the bartender so he needs to see if he hits it off with her. Now, he must flag her down and find out if she is into that lifestyle. The bartender, Faith sits down with them and they compliment her then share they are polygamists. Her jaw drops so far.

They ask her on a date and say she can go on a date with either Sidian or both of them. She agrees and gives them her number. Faith is open to the idea of anything so why not give this a shot. Plus, she appreciated how open they were with their lifestyle. Tosha could not stop smiling that her cheeks started to hurt. If anything, this has given them a sense of hope.

Christeline Connects With Dimitri and The Winders Chat With Kimberley

Even though Christeline and Dimitri cannot be intimate, they can still connect. He took her salsa dancing for her last night in town and they had a great time. They try to show off their moves for Ashley but fail. Luckily, the dancing reiterated how much chemistry the two of them have. Christeline is worried if she can really pack up her whole life in South Africa and move to California. Dimitri worried she will lose interest over time due to the time difference and distance.

The Winders have been courting Kimberley from North Carolina. She is new to polygamy but is very open-minded. They have been chatting for several months and are ready to ask her to come to Utah for a visit. As far as Colton is concerned, if she declines a visit, the courtship can be over. They get her on video chat and after some awkward conversation, she is invited. Eventually, Kimberley says yes but they want her to come before the baby is born. This went exactly the way the Winders had hoped.

Dannielle will be staying right next door to Garrick and Roberta. She feels it is okay for them to stay together for the entire eight days because she has him at home. But she is starting to feel jealousy pangs. They still need a translator app to communicate with Roberta as her English is not good at all. This situation is very awkward for Dannielle and she knows Garrick loves her, as well. But she does not need to see this, too.

It has been a long day so he suggests to Roberta that they tuck “sister” in. She is more worried about Dannielle than Garrick is and wants to check on her. Dannielle admits she will be wearing headphones to bed since their walls are right next to each other. Roberta says how awkward this all is but laughs at the same time. Garrick hugs Dannielle goodnight and gets ready to go to bed in the other room. They promise to be quiet and Dannielle wrestles with her emotions.

Next week on Seeking Sister Wife, Christeline leaves but Tayler is just a few days from coming to see the Snowdens. Sophie celebrates her baby shower and they drop the news about a potential third wife. The Clarks address Kaleh leaving the home for a month and she decides she is not coming back. Dannielle feels left out of wedding planning for Garrick and Roberta. Don’t miss it Mondays on TLC and discovery+.

Ben & Jessa Seewald Reveal Baby’s Name, But What Does It Mean?
Is Jessa Seewald Milking Her Birth Story For More Views & Revenue?
Ben & Jessa Seewald Share First Photos Of Baby Number Four
Jinger & Jeremy Vuolo Net Worth 2021: How Do They Afford Living In LA?
‘The Bold And The Beautiful’ Spoilers, July 19-23, 2021: Carter And Quinn Are All In