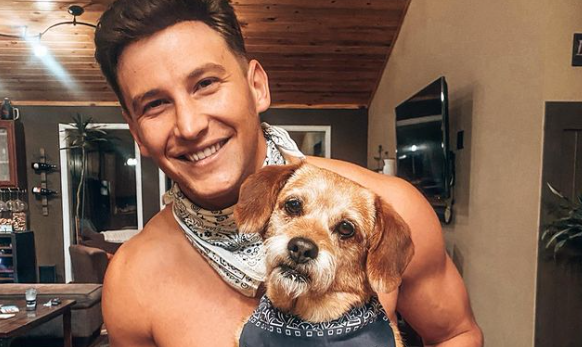 Blake Horstmann hasn’t been without controversy in the Bachelor in Paradise universe. When he was on the show, he romanced Hannah Godwin but hooked up with Caelynn Miller-Keyes and Kristina Schulman on back-to-back nights at Stage Coach. After the show aired and Caelynn freaked out on him, he released their text messages. That is all in the past.

Caelynn is happy with Dean Unglert, Hannah is happy with Dylan Barbour, and Kristina is happily single. Recently Blake attended Kelsey Weier’s birthday party. The rumors the two might be dating started before that though. The party included several other Bachelor nation personalities. Victoria Fuller and Kelsey have become besties since their time on Peter Weber’s season. It was Kelsey’s other bestie who started the rumor mill, Kelley Flanagan.

Why Did People Think Blake Horstmann Was Seeing Kelsey?

Kelley Flanagan did an Instagram Q and A to which Blake Horstmann submitted his own question according to Life and Style. He said, “you coming to Nash this weekend?” Despite the cringy abbreviation of Nashville, Kelley answered him.

She said, “no Blake, I am not coming. I wish I was to celebrate Kelsey’s birthday, but I will still be here in Miami.” Later she added a caption telling him to make sure Kelsey had the best birthday.

Blake had revealed he met Kelley and Kelsey at a Super Bowl event on Behind the Rose. Adding to the speculation Tayshia Adams said they could be a potential couple for the new season on her podcast. This is interesting because Tayshia was Blake’s first date on his season of BIP before the controversy.  When Blake did go to her birthday party over the weekend, he was with a lot of the guys. This included Spencer Robertson, Chasen Nick, Chris Randone, and several others.

Are They Dating Or Just Friends?

A rep for Blake Horstmann said they are just friends. Of Kelsey and Kelley when they met, Blake said, “they were both together. Both great women.” Paradise has only announced one cast member so far. There are rumors even though the pool is very large, producers are having a hard time getting people who want to go on the show.

Due to the controversy surrounding Chris Harrison and the franchise currently, everyone isn’t as apt to join as before. Still, there are a lot of great men from Tayshia’s season and a lot of great women from Peter’s season people want to see find love. There are still tons of possibilities. There also is a possibility if Blake and Kelsey end up on the beach, sparks could fly. Let’s just hope she doesn’t bring another special bottle of champagne.

What do you think of Blake and Kelsey as a potential BIP couple? Comment with your thoughts below.

Emma Johnston Makes New Friend & Gets Pooped On By Them
Dayna Kathan Not Returning To ‘Vanderpump Rules’: Who’s Left?
‘Sweet Home Sextuplets’ Go Crazy Slipping and Sliding In The Park
Lindsay Arnold Dishes On Her Plans To Return To ‘Dancing With The Stars’
Witney Carson Discusses 30-Day Weight Loss Plan Before ‘DWTS’ Return