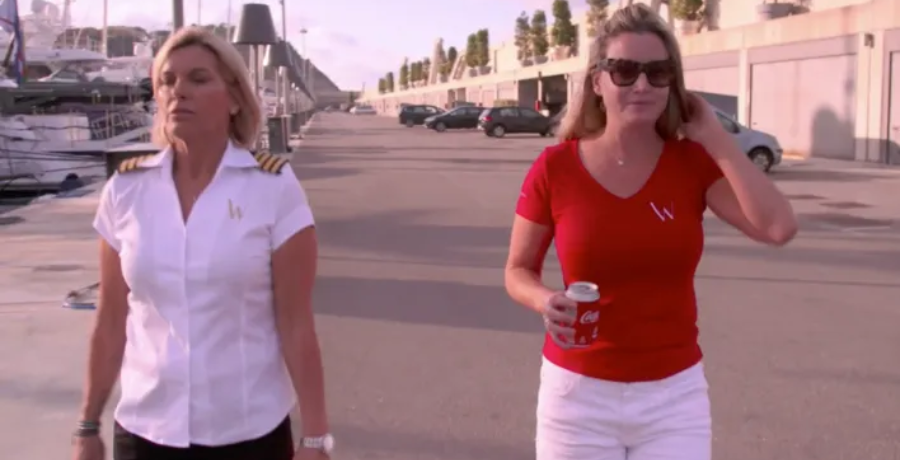 Below Deck Med stars Hannah Ferrier and Captain Sandy Yawn reignited their feud in the media. As fans know, their feud runs deep on the show. Unfortunately, they couldn’t get along due to their differences. Captain Sandy fired Hannah during Season 5 of Below Deck Mediterranean for having unregistered Valium and a CBD pen on board.

Hannah’s firing was a first for the show. That season made history for many reasons, good and bad. For the first time, there was an all-woman leadership. It was also filmed on the largest luxury yacht. However, Hannah’s historic firing did not go over well with fans who lashed out at the sea captain.

Since then, it seemed like the two moved on. According to a new report, the tension between the former crew members hasn’t eased since the Below Deck Med Season 5 reunion.

Now, they’re at war on social media. Their reignited feud has Bravo fans taking sides. Hannah Ferrier revealed that Captain Sandy wanted her fired from day one. She made an appearance on Side Piece with Melissa Pfeister’s podcast where she also addressed her feud with former Below Deck star Kate Chastain.

One topic that had Melissa wondering was Hannah’s firing and the status of her relationship with Captain Sandy. Hannah said that she and Sandy “never saw eye to eye.” Then, she made the revelation that the Below Deck Med star “wanted me out from day one.” The Aussie also felt that the captain was trying to outshine her while filming the show.

“There was some weird competitive thing she had going on with me,” Hannah continued. “Which was kind of silly because it’s not two positions that should be competing. But I don’t think we were competing like in our work positions. I think she was competitive with me on the TV side of things. ”

Below Deck Med star likens Hannah to a server

Captain Sandy spoke out about Hannah’s interview in an interview with Showbiz Cheatsheet. She wanted to speak out and defend her actions for Hannah’s firing. Sandy claims that she was only following maritime law, which she reiterated throughout the season. According to her, their work relationship and Hannah’s firing were never personal.

Sandy had to take responsibility as a captain. She also defended her previous claims that she couldn’t trust Hannah, which is why she had to let her go. She then confirmed that there was never any competition going on between them. However, instead of referring to her as a chief stew, she compared her to a waitress.

“There’s no competition with Hannah,” Sandy said. “I’m a captain, and she waits tables. There’s no equal there professionally.”

Sandy doesn’t understand why Hannah keeps bringing up her past. She no longer wants to talk about what happened on a reality show, considering what’s going on in the current world with the pandemic.

“It’s sad. She’s starting a family like I don’t get it. So sad for her,” Sandy continued. “I don’t hate her. I don’t hate Hannah and never have. I wish her well.”

Captain Sandy and Hannah have reignited their feud again through the media. Even if they didn’t intend to. Fans are impatiently waiting for the news of Below Deck Med Season 6 to see if Sandy will return. In the meantime, Below Deck Sailing Yacht airs Monday nights at 9 p.m. ET on Bravo.