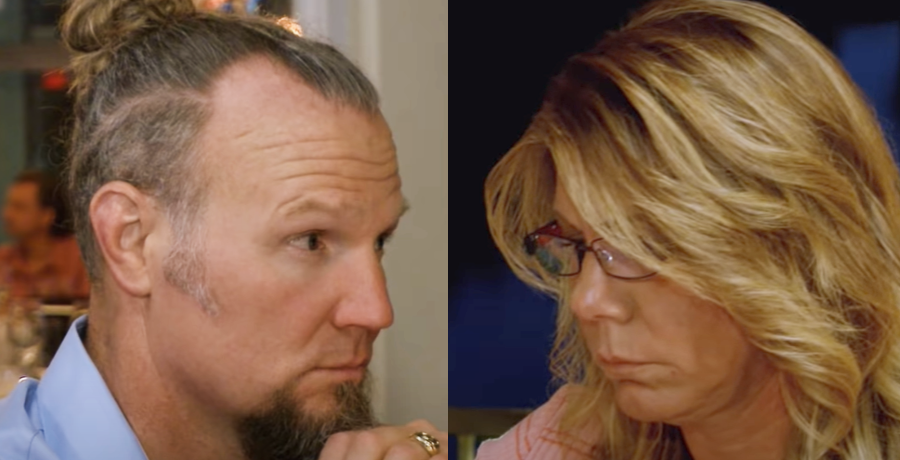 It’s no shock that Sister Wives Kody and Meri Brown are regularly making headlines for the tumultuous relationship. One minute it seems like Kody wants to try to mend the relationship, while Meri doesn’t. The next it spins so that it seems like Meri is the only one trying and Kody isn’t. The drama between these two is enough to make heads spin. Ultimately, it seems that Kody speculates that Meri is just lonely. Keep reading for the latest details from a TLC trailer for tonight’s episode of Sister Wives.

Sister Wives Kody and Meri Brown go out for their 30th wedding anniversary, but is Meri just lonely?

The caption for the trailer details that tonight’s episode of Sister Wives will feature Kody and Meri’s 30th wedding anniversary. Without even watching it, it is easy to assume that things will be awkward between the pair. Even Meri labels it as a “funny situation.”

It isn’t a secret that things for the couple rapidly went downhill after Meri’s catfish scandal. Not only that, but it also isn’t a surprise that Kody hasn’t been spending much time with Meri. Ultimately, fans regularly speculate that Robyn is Kody’s favorite wife.

From the sounds of the trailer, it seems like Sister Wives Kody Brown is trying to help Meri figure out some things. “I’m trying to help Meri determine if she has a spark or if she’s just lonely for anything,” says Kody in one of the episode’s confessional segments. He goes on to say, “Instead of trying to make believe that our world is different, I want us to be honest about where we’re at.”

Fans react to the trailer for tonight’s episode

While Kody Brown seems pretty level-headed about everything. It isn’t enough for fans to take his side in all of the drama. Without fail, there is always someone commenting that Meri needs to get out. They also comment that Meri could do better than Kody. One fan writes, “It’s her husband but he check out a few years ago and she is still trying.”

There are a few select fans that believe in miracles. Some people hold out hope that Kody will wake up one morning and want to fix things with Meri. However, the vast majority speculates that things will never change for the couple and that’s why Meri needs to move on. However, one comment brings up a very valid point. The comment reads in part, “when they were married in their faith they marry for eternity.” Is that reason enough to stay together? Let us know your thoughts in the comment section below.

Do you think the only reason Meri is trying is that she’s lonely? Watch tonight’s episode of Sister Wives airs at 10 PM EST on TLC. This is Season 15 Episode 8, be sure to tune in. Come back to TV Shows Ace for more Sister Wives news.