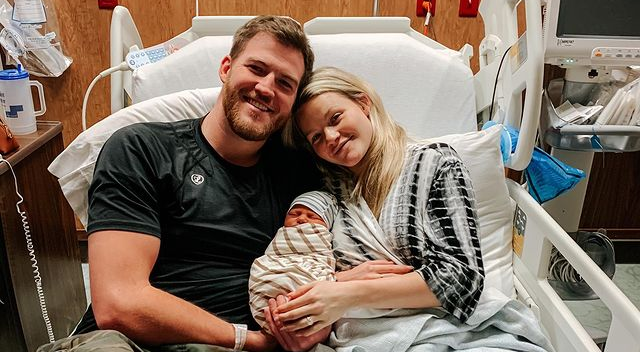 Dancing With The Stars fans enjoyed watching pro dancer Witney Carson document her pregnancy last year. She gave birth to a son, Kevin Leo McAllister, on January 3. But now that Leo is a few months old, Witney is getting a little more candid about her postpartum journey. She loves being a new mom, but adds that she doesn’t exactly feel like her old self these days.

In an Instagram post from early February, Witney says “My post partum [sic] journey has been anything but glamorous.” She goes on to say that women’s bodies are strong and that she’s so happy she brought her son into the world. However, fans clearly see that she’s still struggling with a lot of body image issues.

These feelings resurfaced in another post from mid-March. Witney posted a few progress photos with the caption,

“Progress not perfection ✨ being a dancer growing up & even throughout adulthood (especially throughout adulthood) I’ve always been self conscience about my weight and how I looked. I’ve struggled with this & that’s why I was hesitant to post these photos-I didn’t feel I looked a certain way, ‘good enough’ & that was a sad thought to me. I’m learning to celebrate my body the way it is now and celebrate the small successes to a HEALTHY body, spirit, and mind🙏🏼🤍”

It’s heartbreaking to see such a beautiful and talented dancer struggle with body issues, but many fans appreciate just how relatable Witney’s posts are. After all, postpartum body issues are incredibly common. Many find it refreshing that she’s talking about such a hard and underdiscussed topic.

To learn more about Witney Carson’s postpartum journey, check out this video that Us Weekly put out. The dancer gives a really in-depth look at some of her biggest issues during her postpartum struggles and also reflects on some previous DWTS seasons.

Will the Season 19 champ return in the fall?

ABC recently renewed Dancing With The Stars for Season 30. Witney Carson sat out last fall due to her pregnancy, but hopes to be back in the ballroom this year. We still don’t have the full cast list yet, but Witney really wants to be on it.

“That’s the goal,” Witney answered when Us Weekly asked if she wanted to return. “That’s what I’m working toward. … So if anything changes, we’ll just go with it, but that is in our sights for right now.”

She did add that she really enjoyed being a spectator this year.

“I was just eating my food on commercial breaks like, ‘This is so much less stressed than if I were there.’ But obviously I missed it so much, I miss everybody on there as well. I’m definitely ready to go back.”

Are you ready for DWTS Season 30? Do you hope Witney will come back this fall? Be sure to let us know what you think in the comments.