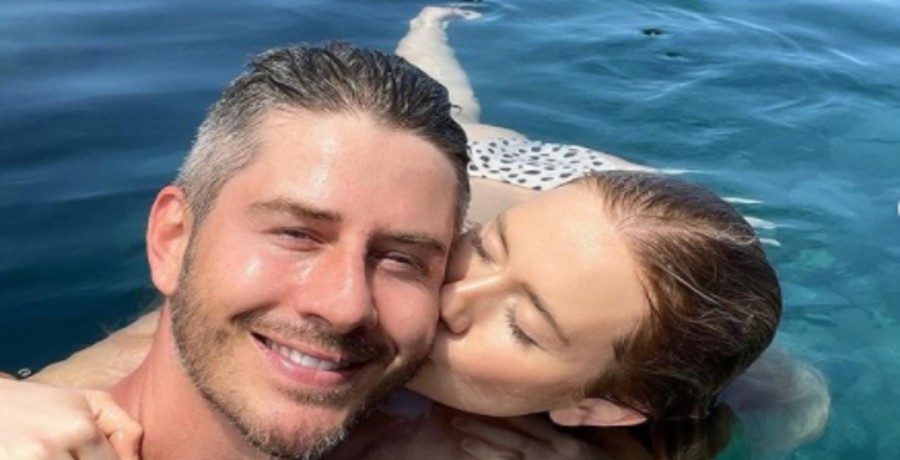 Some fans had to do a double-take when they saw Arie Luyendyk’s post on Instagram. The post featured a picture of him and Lauren outside a tropical house. He captioned it, “WE’RE MOVING TO HAWAII! Link of our home tour in the bio.”

Now the two have been baby-mooning in Hawaii so most of their fans think it’s an April Fool’s joke. One even commented, “I’m so confused now though cuz you’re building the twin’s room in Arizona.” The two closed on the house, so they are serious about living there at least part-time. Another fan said, “they showed working on their house like yesterday so why now move must be a joke.”

They’ve been sharing lots of beach pictures and Lauren modeling bathing suits. One fan said, “glad you could get away before you start your double time.”  They might as well have said triple time because while being pregnant with a boy and a girl the two already have daughter Alessi as well who is almost two.

The link goes to a Youtube video where Arie Luyendyk and Lauren are saying they’re about to go into their new house. Lauren said they closed on the house and they were about to go in as the new homeowners. They are very excited about the lovely two-story house and showed each room including a two-car garage off the patio they want to add on to. One fan commented that Lauren, “hit the jackpot,” with Arie. Most Bachelor nation fans would say that’s a true statement.

They were looking at a second home in Tahoe. Then they landed on searching in Hawaii instead. Arie walked up filming his wife and said, “look at how beautiful Lauren looks right now.” Lauren walked in cautiously because there was a huge spider on the ceiling. He said it’s going to be the perfect spot to raise their little beach babies. Arie said Lauren told him she was fine living in Arizona as long as we can escape to the beach.

Fans Are Happy For Them, Mostly

Arie Luyendyk lovingly tells his wife to sit and rest her little belly as he goes to unpack the car. They are sickenly sweet together and acknowledge that; Lauren says, “he’s the best hubby.” There were some comments on the Youtube video about the safety of the home for their children.

One said, “this house is scary for small babies and toddler…that 2nd story should be off limits/locked down. Unsafe.” For the most part, there was nothing but congrats all around for the excited couple. It’s unclear how much time they’ll be spending in Hawaii as opposed to Arizona. It’s obvious, beach life suites them. What do you think of their second home? Comment with your thoughts down below.