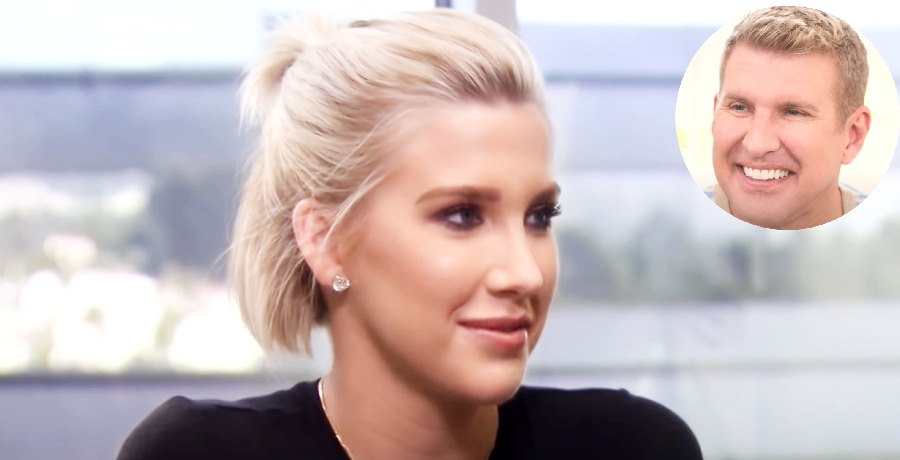 Chrisley Knows Best Savannah Chrisley fans have been dying to get their hands on some SASSY by Savannah cosmetic products. Unfortunately, these products have been sold out for quite some time. However, on the latest episode of Chrisley Confessions, Todd assures listeners that her second launch is coming up. Keep reading to find out more.

The Chrisley Knows Best patriarch takes some time in the latest episode of the family’s podcast to dote on his daughter, Savannah. More specifically, he gives some insight into the stock of Savannah’s makeup line. He shares that the first launch of these products sold out three times “which was amazing.” Additionally, he lets listeners know that “they kept running it until they had no more product.”

Notably, Todd and Julie Chrisley are both “super excited” about the launch of Savannah’s second collection. Julie says, “I KNOW it’s gonna be really great.” And Todd mirrors the sentiment by saying, “it’s gonna be amazing.”

However, the tone of the conversation changes quickly when Todd gives some background information behind Savannah’s second makeup collection. He shares that Savannah began working on this collection after she and Nic Kerdiles broke up. Therefore, this collection is aptly named “The Break-Up Collection.” While it may be hard to imagine how many different makeup looks you can make with a themed collection, Todd assures fans that there is a day and an evening look.

Continuing with his rave on Savannah’s make-up collection, he lets listeners know that the names “are amazing.” Additionally, he recollects about when he was recently scrolling through Instagram and coming across two well-known Los Angeles-based make-up artists. Remarkably, Todd notices that they both have SASSY as their go-to. He specifically mentions Nashville Nights (lipliner). Todd screenshots the images and sends them to Savannah. He says, “Look! You’ve made it in LA!”

She also has a fragrance in the works

Not only do Savannah Chrisley fans have more make-up to look forward to, but her father shares that she has a fragrance coming out. Unfortunately, Todd and Julie can’t seem to pin down a date on when these products launch. Todd initially thinks that the cosmetics don’t come out until August or July. Julie chimes in and shares that she thinks something comes out this month (April). She goes on to list that she also thinks there’s something in June, July, and August.

Just when you think Savannah Chrisley couldn’t be any busier, Todd shares he thinks July is the launch of her hair care products. He lists a hairdryer, hair straightener, and some other stuff. “[Savannah] has the patent on this, folks. She didn’t just take a blow dryer and slap her name on it. She went and created a blow dryer that I think is going to change how people do their hair,” explains Savannah’s dad. He even goes as far as to say, “I think salons are going to love it.” Both Savannah’s parents agree to keep a “great feature” of the blow dryer a surprise.

While Todd admits that he “doesn’t know a whole lot about straightening hair,” he is excited to share what he knows about Savannah’s hair straightener. “But this thing that she did, makes sure that it doesn’t burn your hair.” Apparently, hair straighteners weren’t around when Todd and Julie Chrisley were in high school. However, Todd shares that if “they’d had one out, and wouldn’t burn my damn hair off, I would’ve used it.”

Are you excited to learn about all of these upcoming launches from Savannah Chrisley? Let us know in the comment section below. Come back to TV Shows Ace for more Chrisley Knows Best news.

‘MAFS’ Amani And Woody Prepare For The Next Chapter
Does Henry Cavill’s Beanie Mean He’s Starring In HBO Max’s ‘Superman’?
What Does ‘Temptation Island’ Star Kendal Do For A Living?
Dannielle Merrifield Gets Emotional, Seems To Doubt The Lifestyle
‘Boys From County Hell’ on Shudder a Raucous Irish Horror Film, Preview