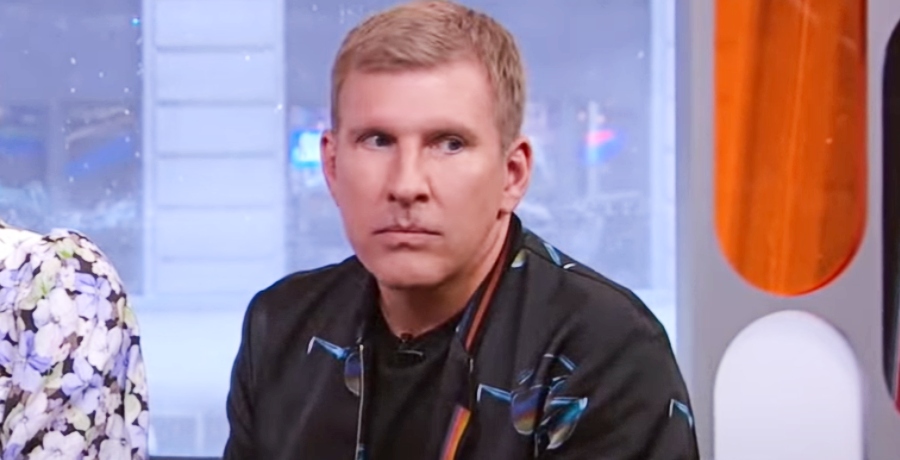 Chrisley Knows Best fans get to spend time with Todd and Julie every week for a new episode of their podcast, Chrisley Confessions. One of the great parts of the podcasts is that Todd and Julie spend time responding to voicemails left for them. During their most recent podcast episode, Todd and Julie get a question from a caller that probably hits a little too close to home. A concerned mother calls in seeking advice since she’s had recent struggles with her older son and his proclivity towards drugs. Keep reading to find out what advice Todd and Julie Chrisley have for this concerned mother.

Chrisley Knows Best Todd Chrisley relates to a caller concerned about her son.

As expected, Todd Chrisley begins by bringing up his oldest son, Kyle. “We’ve been very public with our struggles with our family with our son, Kyle,” opens up Todd. “You know, Kyle had a lot of issues. And he turned to drugs to numb a lot of that pain that was leftover from his mother having no relationship with him, to other things that happened to him in his life that we never knew about.”

Todd describes the process as a “journey” and “it’s almost a marathon.” Todd also says that “you have to care less about other people’s opinions, and more about your child’s opinion of themself.” He goes on to address the stigma that comes along when you have a child that is doing drugs. Accompanying that is the fear of judgment from others.  Ultimately, Todd advises the distraught mother to “stop living for someone else’s approval that is not sitting at your table.”

Julie chimes in with her thoughts on the situation. “As parents, we want to take blame, take it personal when our child has difficulties or has issues that they’re dealing with. And a lot of the times, it’s completely out of our control. It’s no reflection on you as a parent.” Unfortunately, the Chrisley parents agree that it took Todd a long time to get to that place. Julie explains that Todd took Kyle’s situation personally.

Todd Chrisley explains to the concerned mother what it was like for him. He shares with listeners that he’s never drank and never done drugs. So, when Kyle began using drugs, Todd had no idea where it was coming from. Todd goes on to elaborate on his frustration. He says, “He’s never seen alcohol in our home. He’s never seen us smoke a cigarette. He’s never been around it. Where the hell is this coming from?”

Alarmingly, Todd Chrisley gives some intimate details about what he did when he thought he was helping Kyle. “I went from one rehab to the next. Spent over a million dollars thinking I’m helping my child.” Ultimately, Todd comes to the realization that he couldn’t keep doing the same thing and expecting a different result. Todd goes on to explain how rehab works. “Rehab only works when the person that signs up for it is looking to be rehabbed.”

Todd Chrisley goes on to explain the heartbreaking parts of his family’s situation with Kyle. He shares that Kyle was estranged from them for about three and a half years. However, Todd still knew what was going on with his oldest son since he had someone following him. “I had to learn to love Kyle from a distance,” shares Todd. He said this effort was made in order to “protect the rest of the family.”

Kyle Chrisley isn’t the only Chrisley child to surprise Todd

However, Kyle isn’t the only child that Todd has been concerned about. At 19, Chase began drinking. According to Todd, he was “going out with is buddies, going to strip clubs.” The cycle starts all over and Todd begins to wonder, “where did our parenting go wrong? What did we do to cause this?” He lets the concerned mom know that she didn’t do a thing to cause this.

For Chase, they had to cut him off. “If you chose to go to strip clubs, you’ll do it with your money. You won’t do it with ours,” explains Todd. This just goes to show that different children require different things. Luckily, it seems like everything has worked out for the best with Kyle and Chase Chrisley.

How do you feel about Todd Chrisley’s advice to this distraught mother? Let us know in the comment section below. Come back to TV Shows Ace for more Chrisley Knows Best news.