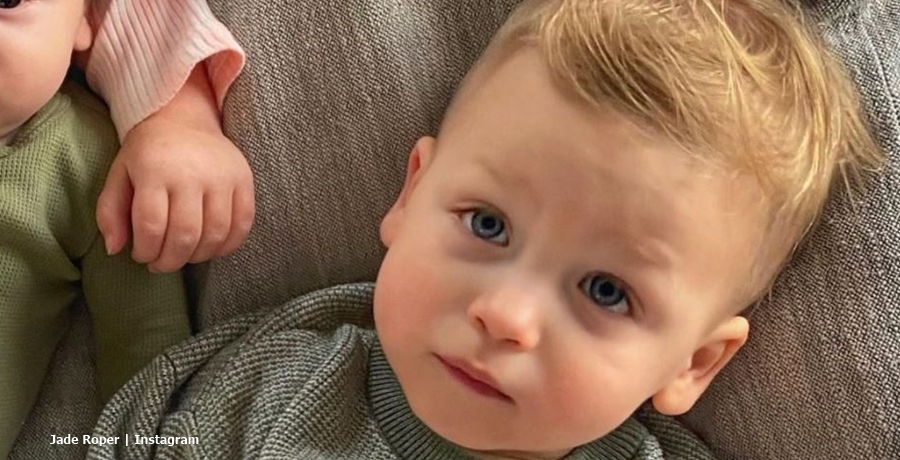 Jade Roper’s twisted picture of her son, Brooks seemed a bit hard on the eyes of Bachelor in Paradise fans. Actually, a fun post, a lot of fans said they had to do a double-take. Some of them zoomed in to make head or tail of it. In fact, it made sense after a while. So no – Jade and Tanner Tolbert’s middle child wasn’t cropped and put back together like a jigsaw. However, briefly, the photo made Instagram fans freak out a bit.

Jade Roper’s twisted picture might remind you of The Exorcist, in a nice way

When Tanner Tolbert shared a photo of the haircut he gave Brooks, ABC fans giggled. After all, it really made him look like a mullet. Seeming quite proud of himself, the Bachelor in Paradise star noted that he felt “good about it.” Fortunately, Brooks, who arrived between baby Reed and big sister Emmy probably didn’t mind. Mind you, some fans felt relieved that he probably won’t see the photo for years to come. In the blink of an eye, no doubt he grows up into a young teen.

Meanwhile, Jade also shared about her son and his mullet haircut. Her comment read, “I left for one hour this morning and came back to Brooksy looking like this.” Additionally, she noted she felt torn between crying and laughter. Nevertheless, Jade Roper’s twisted picture of Brooks looked infinitely worse at first. It came on April Fool’s Day. Actually, that certainly seemed like a good moment to share such a strange photo of her son. In fact, it looked strange not because of the clothes he wore, but because he really looked twisted! In fact, he looked like a nicer version of The Exorcist.

Brooks with his head on backward?

In the photo that his mom shared, Brooks Tolbert obviously played with his sister Emmy at dressing up. All kids love doing that! Actually, BiP fans agreed that he looked super cute in his pink tutu. Well, that came after people got their heads around Jade Roper’s twisted picture. Jade captioned her post with, “Tell me you’re a supermodel without telling me you’re a supermodel.” Next, the BiP star added, ” 😍 Brooks channeling his inner Harry Styles like he was posing for the cover of Vogue.”

A lot of ABC fans loved the hashtags. One of them said, “#imgonnabeasupermodelandmyhairwillshinelikethesea.” Another hashtag on Jade Roper’s twisted picture read, “#clotheshavenogender.” However, the fact that Brooks looked like his head faced backward took up a lot of the discussion. One fan wrote, “Omg I thought his head was backwards at first that scared me!”

Another fan said about Jade Roper’s twisted picture, “My first thought was…what the heck happened to his head!!!!! Hahaha.”

Luckily, the photo only looked strange from the way Brooks stood. Maybe one day, Jade and Tanner bring more adorable kids into the world. But for now, little Brooks just stole the show in his pink tutu.