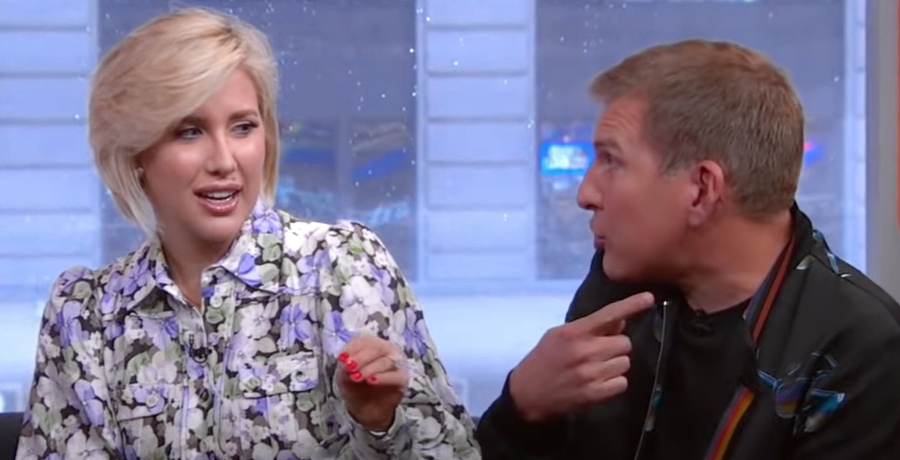 While the latest season of Chrisley Knows Best may close to over, fans can still get a regular Chrisley fix by tuning into Chrisley Confessions Wednesdays wherever you listen to podcasts. Unfortunately, this week’s episode begins with an unsettling sequence of events. In an earlier episode, Todd briefly mentions that the Chrisley family is under 24-hour security due to a stalking incident. During that podcast, he didn’t share many details. Keep reading to find the latest information about Savannah Chrisley’s stalker.

The Chrisley family is currently under 24-hour security because a “psycho” is trying to make contact with Savannah, according to Todd’s statements in an earlier episode of Chrisley Confessions. However, he doesn’t give many details after that. From the statements that Todd makes, it seems like they know who this is. “This guy is a drug addict. He’s been arrested multiple times. He has gone to jail. He’s been in psych wards. You name it, he’s done it,” divulges the Chrisley Knows Best patriarch.

Unfortunately, this person is “relentless” as Todd describes him. Shockingly, Todd confirms that this person has Savannah’s phone number. Ultimately, no one is taking this situation lightly. Todd explains that the network (USA Network), private investigators, and the police are involved from multiple jurisdictions. With the cooperation of all the involved parties, they were able to determine that Savannah’s number was sold on the dark web.

Not only that, but more alarming things have been happening to the other members of the Chrisley family. During the course of the investigation, authorities determine that someone has attempted to hack Savannah’s iCloud. Unfortunately, hacking attempts have been made on the social media of other Chrisley family members.

Sadly, Todd explains that “it is to the point now where none of us are getting any sleep.” However, he explains that there is an abundance of security precautions in place. They have security officers outside their home, walking the perimeter at all times of day and night. Not only that, but Savannah has security with her at all times.

However, it seems like things are concluding. Todd and Julie share that there are finally criminal warrants are in place to arrest this person. “I mean I understand that there are rules that have to be followed to sign warrants. It’s almost like you have to wait till someone almost or is harmed before they do anything,” says Julie as she expresses her frustration. Todd shares that at the beginning of all of this drama, he was told that “this guy almost has more rights than we do.”  Concerningly, Todd elaborates on that state. “Because he has a mental illness, that he has more rights than my daughter has or my family has,” shares Savannah’s dad.

Consequently, Julie Chrisley shares something to the point that they aren’t discounting mental health issues. She says that “we all know that mental health is important.” However, “this is so much different, this is so much more.” Todd goes on to explain how this is different. This person has already been in psych wards and escaped from psych wards.

Todd goes on to say that even if they can’t find him to pick him up, “hopefully this warrant will be a deterrent.” According to Todd, this person claims to listen to the podcast, stalks Savannah’s social media, and theirs. This may be some insight into why Savannah hasn’t been as active on social media recently as her fans know her to have been in the past.

While Todd seems to be very careful about giving too much information in the podcast, that changes. He says, “So now you, Ryan, are aware that there is a warrant for your arrest. If you’re tuning into this podcast this morning, I gave you my word when you called my daughter’s phone two nights ago that if you kept f-king with me, I would have your ass arrested. Your day has come. Now if you come near my home or come near my daughter, there are people there that have something for you too. Just giving you that heads up so that you can’t say that you weren’t warned.”

Did you know that Savannah has a stalker? Are you shocked about how this situation was handled? Let us know in the comment section below. Come back to TV Shows Ace for more Chrisley Knows Best news.