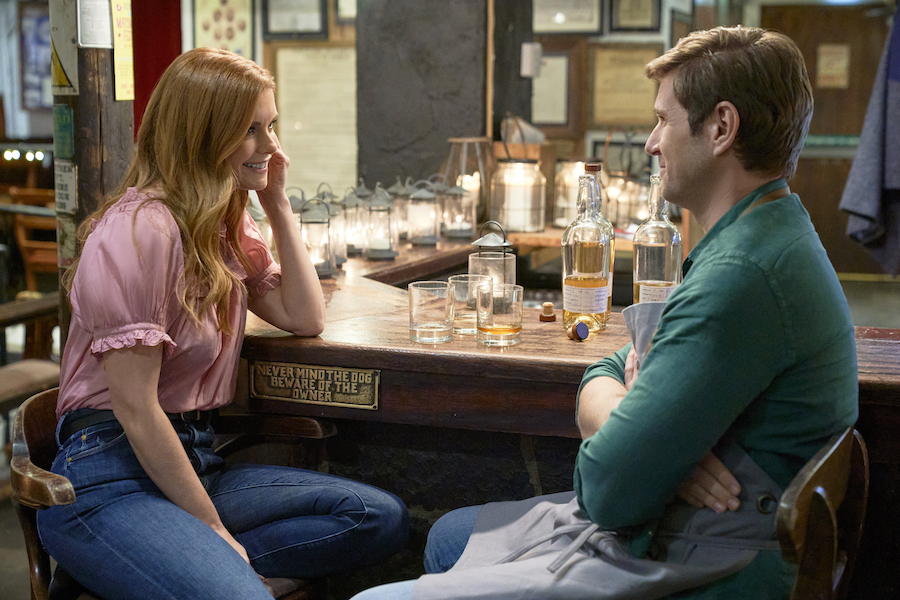 Feeling lucky? Hallmark’s Spring Fling promises a romantic destination love story in Ireland! Entitled As Luck Would Have It, this new movie pairs up JoAnna Garcia Swisher (Sweet Magnolias, Once Upon A Time) and Allen Leech (Downtown Abbey, The Imitation Game).

Ready to see if the luck of the Irish also makes people lucky in love? Here is some information about this new enchanting movie.

What Is Hallmark’s As Luck Would Have It About?

Ready to take a trip to Ireland? The upcoming romance, As Luck Would Have It, is your ticket to romance, adventure, and the beautiful Irish scenery. According to the Hallmark synopsis, Lindsey’s company sends her to Ireland to acquire land that is perfect for a resort. She decides to enter the town’s matchmaking festival to prove her investment and win over a handsome local, Brennan (Leech).

Expect to see a lot of the gorgeous Irish landscape. In the Hallmark First Look, Lindsey and Brennan look over a breathtaking cliffy area. Ever the local, he tells her “Legends have it, these cliffs have a mystical power. Lindsey looks at Brennan with a lot of skepticism. She then asks, “Is that true?”

He gives her a look that will certainly melt Lindsey’s heart!

Moreover, As Luck Would Have It is entirely filmed in Ireland. Expect some fun Irish games, dancing and, merriment, as well as some stunning views. Clare Niederpruem, who directed Love On Iceland directed this Irish romance. Anyone who saw the spectacular scenery in that Winterfest movie knows that Clare knows how to showcase natural sites.

When Can You Watch As Luck Would Have It?

Moreover, be sure to jump on Twitter premiere night. Hallmark fans, cast and, insiders will be tweeting along throughout this enchanting movie.

According to The Futon Critic, this is the first Hallmark movie for both JoAnna Garcia Swisher and Allen Leech. Hallmark’s Executive Vice President, Programing, Michelle Vicary expressed her enthusiasm for this matchup.

“JoAnna Garcia Swisher and Allen Leech are both immensely talented actors and we are delighted to welcome them to the Hallmark Channel family.” She continued, “Between its charming leads and lushly-authentic Irish setting, viewers are sure to be captivated by this sweet, lighthearted romance.”

This is quite an upgrade for this spring. Normally, Hallmark uses their usual repertoire of actors for non-Christmas movies and saves big destinations for Countdown to Christmas. As Luck Would Have It promises all the splendor of a holiday movie, and will certainly be something very special and enchanting.

Be sure to catch the premiere of Hallmark’s As Luck Would Have It on Saturday, April 10, at 9 p.m. Eastern, on the Hallmark Channel.

Kanye West Wasn’t As Committed To Kim Kardashian As She Is To Him
Wait, Did Kylie Jenner Reveal Her Baby’s Gender?
Death Leaves Candace Cameron Bure With A Heavy Heart
Erin Krakow Hints ‘When Calls The Heart’ Season 9 Premiere Date
Joy-Anna Forsyth Dragged For Putting Her Kids In ‘Unsafe’ Situation