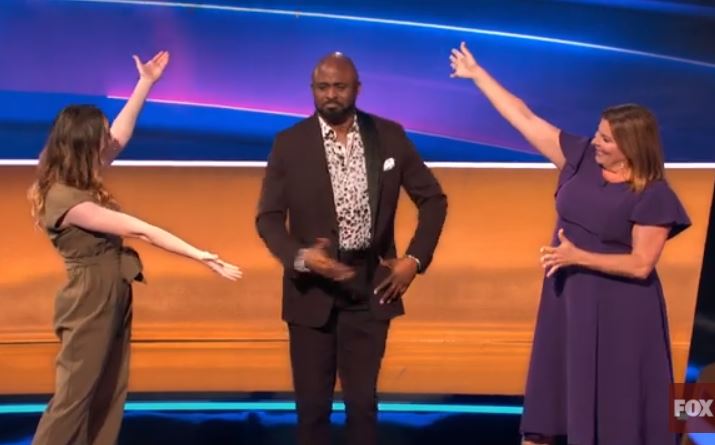 FOX hit series Game of Talents is a fun competition that features Wayne Brady. But the handsome host has to adapt and become a Bjorn for his lovely contestants Marie Claire and Julianne who are part of an ABBA tribute band.

On TV Shows Ace exclusive clip, Brady becomes Bjorn as the two get him to sing and dance to a special song.

Will Wayne Brady sing Mama Mia? Watch as the two women get Brady to get into the ABBA choreography.

The Game of Talents show

Brady jokes that he has met a lot of bands, but never has he met an ABBA tribute band.

The two women say that they need a boy to accompany their girl band, and Bjorn is the name of the ABBA singer they are trying to recreate in this impromptu ABBA performance.

Brady is game as always, and the women tell him to just follow their lead. An awkward dance sequence soon follows. He jokes that if his TV hosting gig doesn’t pan out, he can join them.

FOX describes the high-energy show as a spectacle of “awe, wonder and large-scale variety show with a clue-centered, high-intensity investigative game.

Described as a hybrid series, Game of Talents pits two teams of contestants against each other as they attempt to figure out the surprising — and sometimes bizarre — hidden talents of the mystery performers.

And with more than $200,000 up to win as a prize, it’s up to the contestants to identify unique skills, including fire dancing, spider wrangling, chainsaw juggling, and contortion.

Brady is an all-star performer who has highlighted and starred in some extremely popular TV series. Comic and singer Wayne Brady has been seen in Whose Line Is It Anyway? Hosted by Drew Carey, the show featured Colin Mochrie, Ryan Stiles, and other regulars, who played improvisational games.

He has been seen in I’ll Fly Away and In the Heat of the Night. In 1998, he hosted the VH1 series Vinyl Justice. He showed off his sense of humor about his squeaky clean reputation by playing an arch-criminal on Dave Chappelle’s Chapelle’s Show back in 2004.

In a press release for the FOX series, Brady said:

“What excites me about this series and this concept is every week we get to show off talents that will amaze, inspire and, in some cases, make your jaw-drop,” said Brady. “As someone who loves games and loves all types of talent, this was a perfect fit for me and I’m thrilled to be a part of the creative team bringing it to life. I also get to give away someone else’s money, which I always enjoy doing!”

GAME OF TALENTS airs Wednesday nights at 9/8c on FOX.

Is Michaela Bates Sharing Anything About Her Struggle With Infertility?
‘Shameless’ Series Finale Brings Back Three Characters: Who Are They?
Exclusive: Danica Patrick Races in Moab Desert on ‘Running Wild with Bear Grylls’
‘The Bold And The Beautiful’ Spoilers: The Cops Think Thomas Is A Killer
Max Schenzel Has A New GF But There’s Already Drama – See Photos