While the Bates family’s lives have been largely documented on their UPtv show, there are plenty of things that fans just don’t know about. Here and there, they share information about their family. Following the Bates family on social media is a good way for fans to learn more about them. Recently on social media, Carlin Bates Stewart revealed a secret about her family.

In a new Instagram post, Carlin shared several photos of herself and her daughter Layla, 1. The pair smiles for the camera in the shots. In one of the photos, it looks like Layla is cheering for herself with her hands in the air. In her caption, Carlin writes, “The secret is out…Layla is my favorite child! 👯‍♂️”

While this post could cause some alarm to fans, they should know that Carlin isn’t choosing Layla over another kid. Layla is Carlin and her husband Evan Stewart’s only child. They did recently add a puppy, Izzy Rue, to their family.

So far, things seem to be going well, but they do have to work on all of the not-so-fun puppy tasks, like potty-training. Some days, Izzy may not be the favorite “child” because of the busyness that the puppy brings to the family. No matter what, they seem to love the dog, and Layla is learning how to get along with her.

In Carlin’s caption, she offers a few fans coffee on her, so that may be upping the engagement on the post. Still, fans are commenting on just how cute they think Layla and Carlin are. They think that Carlin’s post is sweet, and they love the new pictures of the mom and daughter.

For now, Layla is an only child, but Carlin is already getting baby fever. So, Layla may not have the number one spot to herself for too much longer. As of right now, Carlin and Evan haven’t announced that they’re expecting, but fans predict this news will come soon enough. In the meantime, the couple is enjoying the special times they have with Layla. 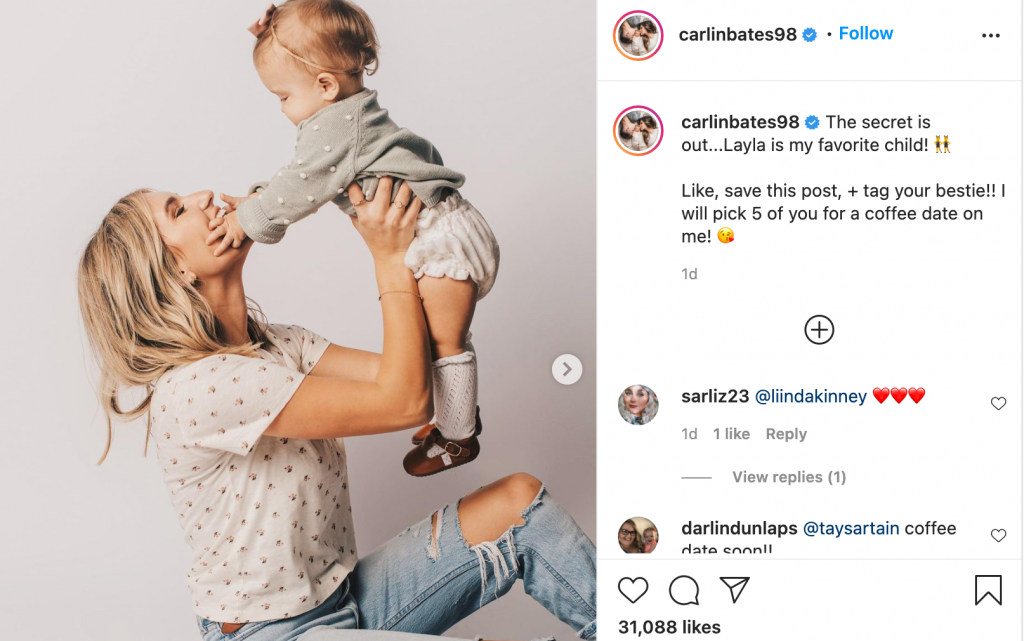 So, what do you think of this new revelation from Carlin Bates Stewart? Are you surprised to hear that Layla is her favorite? Let us know in the comments below.

For the latest Bringing Up Bates news, check back with TV Shows Ace. The show returns to UPtv soon, and you can get all the details here.