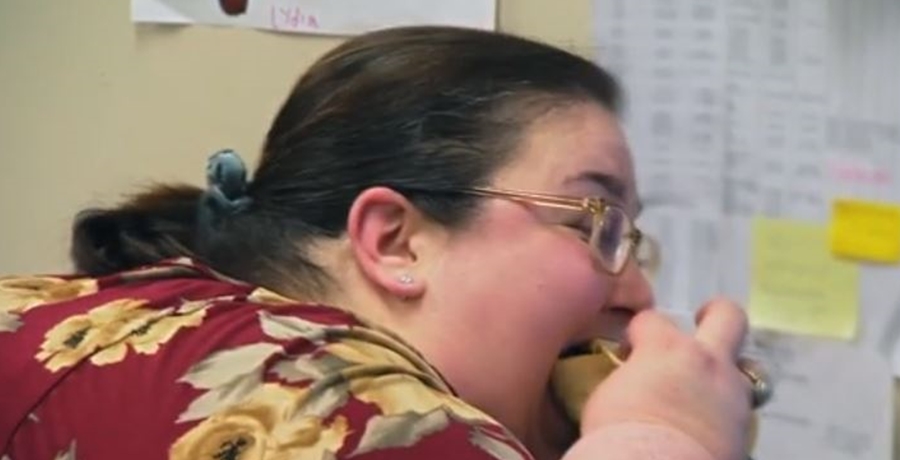 My 600-lb Life featured Carrie Johnson on TLC’s Season 9 in January. Now, recent updates from social media reveal that a lot changed since her gastric surgery. Fans know that her health issues from her food addiction seemed likely to kill her way before her time. Additionally, her marriage seemed affected by it and she feared her husband Chris might leave her one day. So, how is she doing now? Did she keep her weight down? Read on to find out.

Recapping slightly, you might recall that Carrie suffered terrible pain and trauma when someone in her family died after gastric surgery. After her dad went for it, something went wrong and he suffered from sepsis. Meanwhile, Chris, her husband also carried a lot of weight. So, he decided that he’d lose weight alongside her, and encourage her in a healthier lifestyle. With her dad struggling, it’s clear that Carrie lived in an enabling environment. Additionally, that carried over with her husband. However long before that, she struggled.

An almost life-long food addiction resulted in My 600-Lb Life Carrie attending college when she weighed in at 400 pounds. A single mom, she later met a man online, but he became abusive. Of course, that left her more addicted to comfort food. Luckily, she escaped from that and met Chris. Aware that she might die from her obesity, she accepted her husband’s help. At the end of her episode on TLC, the Texan had lost 194 pounds. Plus, Chris shed 60lbs. The show aired in January, and since then, Carrie shared a few updates on her Facebook.

Carrie Johnson, (Carrie Cox) from My 600-LB Life doesn’t share many public posts on Facebook. Additionally, she steers clear of Instagram and Twitter. However, what she shares reveals that she certainly looks amazing these days. This year, she added three new profile pictures. Actually, each one shows remarkable changes, so her fans sent in their congratulations. Of interest, one of her followers also struggles with her own obesity issues. Clearly, it seems like they help support and mentor each other in their continuing journey.

The My 600-LB Life fan told Carrie. “I’m glad I reached out to you and we become friends! It’s better to have a friend on the same journey!

” From Carrie’s answer, it seems that the TLC star also appreciates their mutual goal. She said,

you’re so great! I’m beyond thankful to have made a friend of you out of this whole experience! Thank you so much for your time and reaching out to me!”

Take a look at the photos below:

What are your thoughts on My 600-LB Life Carrie Johnson’s transformation? Do you think that she looks amazingly? Sound off in the comments below.

‘Days of Our Lives’ Week Of April 12 Spoilers: Chad’s Gonna Be A Daddy – Xander Married?
‘The Little Couple’ 2021: Zoey Freaks Out Her Dad With Brain Food
Is ‘Shameless’ Season 11 Leaving The Door Open For Spin-Offs?
Michelle ‘MiMi’ Theriot DUI Bust Update: Did She Get Jail Time?
Khloe Kardashian Bares Her Nude Body & Her Insecurities