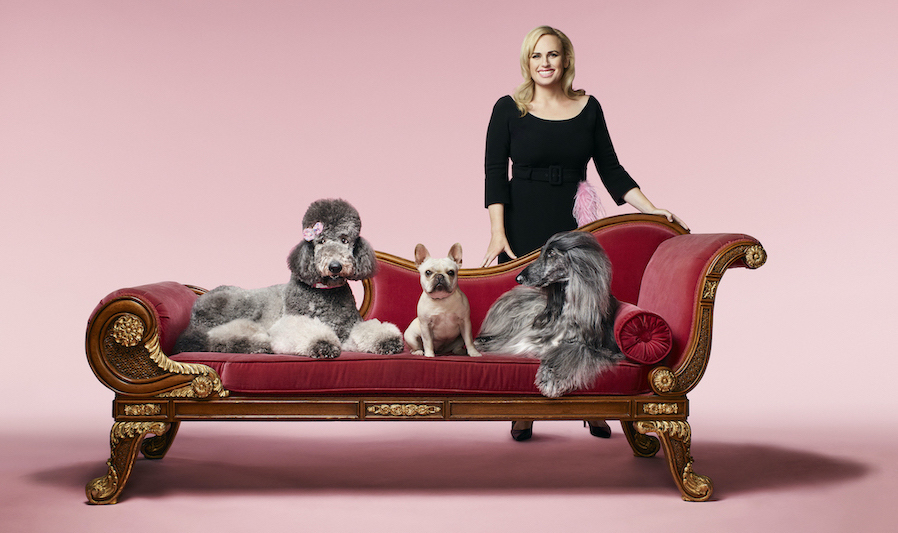 Is your dog all bark and no spark? Rebel Wilson hosts an entirely new reality competition for ABC, Pooch Perfect, that will have your four-legged friend wagging their tail. The new series shows how these lucky dogs are in need of a makeover.

ABC’s Pooch Perfect is the ultimate dog grooming competition series with the best pet stylists in the country who, along with their assistants, complete a series of cute dog-themed challenges.

Each week will feature two challenges, the Immunity Puppertunity and the Ultimutt Challenge Showdown where stylists must create dramatic transformations.

One team will be eliminated each week, and all of this activity is leading up to the final competition for the coveted Pooch Perfect trophy and giant cash prize.

At the recent Winter 2021Television Critics Association meeting, TV Shows Ace learned all about the new series aimed at dog lovers, made by dog lovers, and for dog lovers.

During the TCA question and answer period, Rebel Wilson answered one TV critic’s question and shared that she was a longtime dog lover.

She said: “I am a fourth-generation dog show-er. My great-grandmother started The Beagle Club of Australia, and every weekend of my childhood up until I was old enough to stay at home by myself I was going to dog shows.”

Wilson noted that her entire family was in on the dog showing business. And even today her mother is an international dog shower. She added: “We traveled all around Australia to different dog shows, and we’d sell dog grooming products mainly to all of the dog show-ers. So dogs have just been such a huge part of my life…But I was personally a junior handler and went to so many dog shows all around the country and, like, showed dogs and groomed dogs.”

As for where the dogs come from, executive producer Elan Gale noted: “We have a wide variety of places where our dogs came from. All of them came from homes, though. They were pets. They were beloved pets that were brought to us, given a test for temperament to make sure that they liked being groomed because some dogs like it more than others. Some find it uncomfortable. So we made sure we had the kind of dogs that were used to the entire process. And, yes, there will definitely be disclaimers both on camera and off about making sure not to try it at home, generally speaking.”

Lisa Vanderpump is a veteran star of reality TV, beginning as a Real Housewife, and even scoring her own series, Vanderpump Rules. She even has a charitable foundation devoted to dogs.

The British beauty will serve as a judge and spoke at the TCA about the specialness of this particular series that takes many rescues and gives them the glamour treatment. Many of her fans know she is a bonafide dog lover herself.

Vanderpump said: “…To see all of those happy dogs pampered and loved, [it] was just such a wonderful experience for me, especially coming from the place of rescue and seeing so many dogs over the years, thousands of dogs that have never been groomed, have never been taken care of, and they have lesions on their skin and matting. And you see these dogs, and to be honest, they’ve actually got to be in tiptop condition to even be groomed, to be, like, in the creative grooming process. So the beautiful coats and conditions, to me, that was just a joy. I mean, I was so excited about being on this show, but once I got there, I was just like, ‘That’s it.’ It was a wonderful experience…To come into this situation was just like a gift. And to see all of these happy dogs powdered, it was just beautiful. It was a beautiful experience. I think people are really going to enjoy watching it.”

Tune in to watch the beautiful work of these top groomers make a dog’s day a fantastic one.

Thomas Jacobs Looks Back On His ‘Bachelorette’ Journey
’90 Day Fiance: The Other Way’ Spoilers: Did Ellie & Victor Break Up?!
‘In Pursuit’ Of Dirtbags: The Walsh Team Ask Viewers For Help Ahead of Season 3 Premiere
discovery+ Series ‘Prisoner of Love’ Turns Inmates Into Soulmates
‘When Calls The Heart’s’ Erin Krakow Wishes Lori Loughlin A Happy Birthday