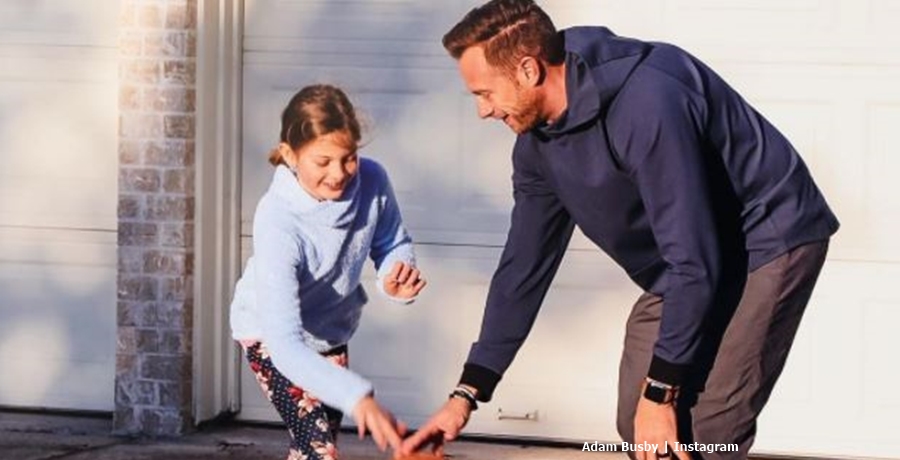 OutDaughtered Season 8 is on right now, so many fans check out Adam Busby’s Instagram posts. However, now, they are confused. Some of them ask what the heck’s wrong with his legs? They’re not talking about the injury he got in October. Possibly,  the suspected blunder by the quint Hazel might relate to the odd appearance of his legs on Friday, March 26.

In the current season of the TLC show, fans heard that Danielle Busby faces the dreaded possibility of heart surgery. For quite a long time, she felt alarming symptoms. Concerned, Adam took her to the ER. Later, she bounced from specialist to specialist. However, the feedback from the family seemed very vague so their fans stressed. Nevertheless, as her health issue popped up in the show on discovery + and TLC, they remained quiet for their NDA. Meanwhile, fans heard that Adam Busby also ended up with a health concern involving his leg.

OutDaughtered Season 8 reveals a healthy-looking Adam. However around about the time that Danielle started consulting with specialists, he also ended up in a lot of pain. He spends as much time as possible in the gym. However, that’s always an issue with a houseful of kids. So, he goes really early in the morning. One day, he injured his knee and it took months to heal.

In fact,  the issue that mystifies fans has nothing to do with that. So, rest easy knowing your favorite TLC dad isn’t about to head off to the ER.

When Adam Busby shared a photo promoting Air Max Day, OutDaughtered Season 8 fans noticed something wrong with his legs. One fan commented, “I need to know what’s up with one leg being more tan than the other.”

Another follower commented in reply, saying, “LOL like tanning gone wrong – mystifying moment haha.” Well, that’s a huge possibility as fans of the show often see the quints playing around with makeup. And often, dad Adam’s prettied up by the girls.

In fact, recently, fans wondered if Hazel misapplied self-tanning lotion. Hazel’s the little redhead that fans see visit the eye specialist again in OutDaughtered Season 8. We reported that fans wondered why she seemed to have dark patches on her face. Arguably, perhaps the lighting wasn’t quite right. But fans know Adam Busby’s an awesome photographer. So, fans decided she made a blunder with the self-tanning notion.

After seeing the comments by mystified fans, Adam Busby told them that there’s nothing’s wrong, and the lighting caused one leg to look dark and the other very white. So, it’s not a deathly situation. But it seems something intriguing for OutDaughtered Season 8 fans anyway. Did you feel a bit mystified when you saw Adam Busby’s different colored legs? Did Hazel get ahold of her dad with the self-tanning lotion? Don’t forget to sound off in the comments below.

Remember to keep up to date with OutDaughtered Season 8. The next episode comes on March 30 and involves a trip with the Mills family to San Antonio.

Wait, What?! Colton Underwood Getting Netflix Documentary??
Tuesday’s ‘General Hospital’ Spoilers: Chase Is In Trouble As Peter Makes Threats
‘Days of Our Lives’ Spoilers: Abby Can’t Believe Her Ears
Brittany Cartwright & Jax Taylor Already On Board For Baby No. 2?
Cheryl Burke Admits To Being A ‘Bridezilla’ While Planning Her Wedding