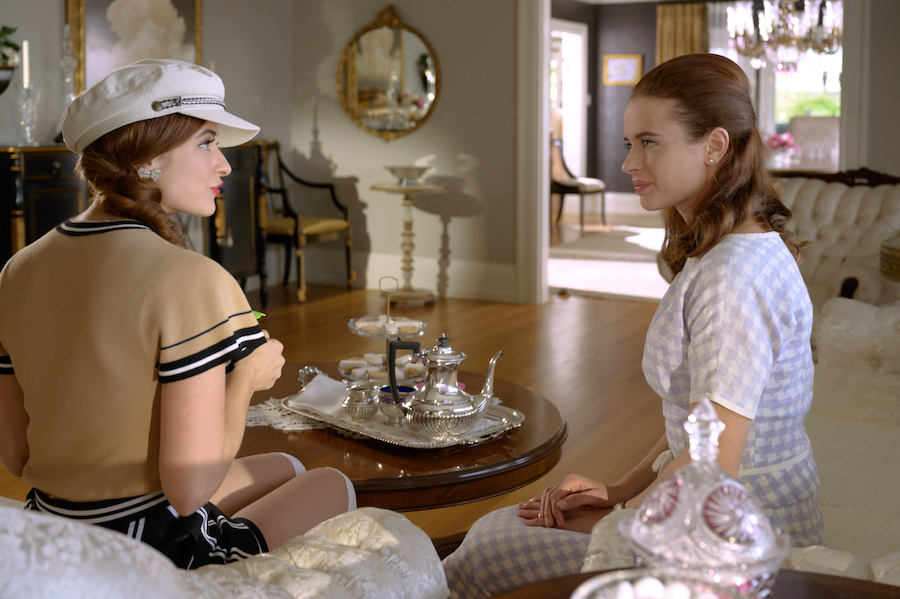 Did you get into Lifetime’s Ruby and Pearl In The Mist last week? Are you ready for more from the V.C. Andrews Landry series? The next movie is All That Glitters. In this movie, Raechelle and Karina Banno return as Ruby and Giselle.

What is this third movie in the V.C. Andrews series about?

What Is Lifetime’s V.C. Andrews’ All That Glitters About?

According to the Lifetime press release, All That Glitters picks up as Ruby R. Banno) is driven from the Dumas mansion and returns to her beloved childhood home in the bayou. Back home, now, she’s intent on creating a new life for her baby girl, Pearl.

Ruby’s high-school sweetheart Paul (Duke) is there to support her again, and when he moves her into his impressive home, she has new hope for the future. However, Ruby can’t escape the judging eyes of Paul’s mother Gladys (Alfonso). She knows Ruby and Paul’s dark secret.

Gladys taunts Ruby by saying, “Love. Everyone needs so much of it. No wonder we’re all exhausted.” This chills poor Ruby.

Moreover, Giselle (K. Banno) continues to torment Ruby when she reveals news about Beau (Wood), Pearl’s real father and, Ruby’s true love. Ruby longs for another life, and the web of deceit continues when Giselle falls into a coma and Ruby is lured into a twisted plot to be with Beau.

Catch the premiere of V.C. Andrews’ All That Glitters, on Saturday, March 27, at 8 p.m. Eastern, on Lifetime. Also, be sure to go to Twitter and live tweet. Just like last week, everyone will be talking about this movie. In this time of self-isolation, there is nothing more comforting than sharing all of this Lifetime crazy with friends watching the very same thrilling movie.

What Lifetime Movies Are In The V.C. Andrews’ Landry Series?

There are a total of four movies in Lifetime’s V.C. Andrews’ Landry Series. They include Ruby, and Pearl in the Mist, and then on Sunday, the final movie, Hidden Jewel. Hidden Jewel will air on Sunday, March 28, at 8 p.m. Eastern.

When Can You Watch V.C. Andrews’ All That Glitters?

Be sure to catch the premiere of V.C. Andrews All That Glitters, on Saturday, March 27 at 8 p.m. Eastern, on Lifetime. Missed any of the earlier movies? Both Ruby and Pearl In The Mist will air just before All That Glitters. Be sure to watch, or rewatch, these Lifetime movies in the right order to enjoy the full V.C. Andrews story.

What Can Fans Expect From The Next Sassy By Savannah Relaunch?
‘General Hospital’ Spoilers: Willow’s Stressed, Sasha Chats With Brando
Busby Birthday Quints Each Got Their Own Special Cake This Year
‘Sister Wives’ Janelle Brown Has ‘One Of Those’ Days
Hallmark’s ‘Chesapeake Shores’ Adds ‘OTH’ Alum, Robert Buckley