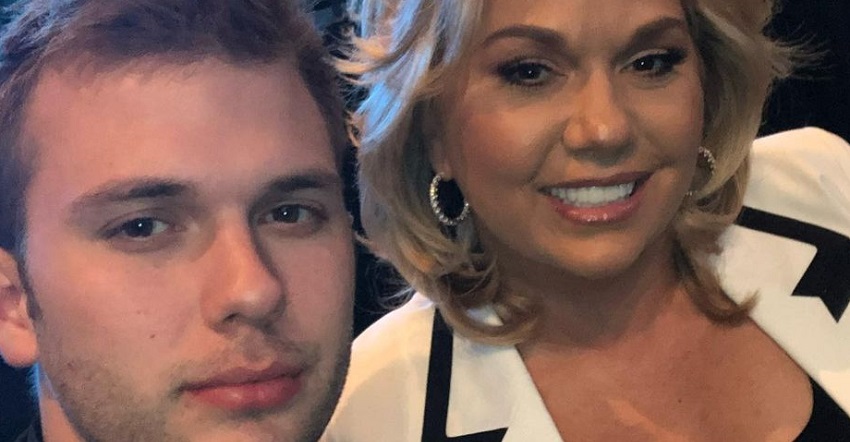 During the Chrisley Knows Best Season 8 Finale, Julie offers her son Chase some baking advice. Turns out, he’s not that great at baking. His father Todd, however, thinks he should just stick to store-bought baked goods instead. Likewise, his sister Savannah also makes it clear she isn’t interested in tasting the cake he attempted to bake.

Chrisley Knows Best fans know Julie doesn’t have a problem with cooking and baking. In fact, some video clips have made it very clear that the rest of the Chrisley family might starve without Julie to cook their meals. One clip that makes rounds on TikTok, for example, features Todd and Chase asking Julie what is for dinner. Julie, however, makes it clear they better figure something out because she isn’t cooking. In the clip, it becomes clear Todd and Chase don’t have much experience with cooking. Fans assume they order takeout when she isn’t interested in cooking.

Chase tried to bake a cake to apologize to Emmy

During the Season 8 Finale, we see Chase Chrisley in the dog house. While he didn’t mean to, he accidentally stood Emmy up. Realizing she was mad at him, he ignored her phone calls which only made things worse. In trying to apologize, he took her on a group date which didn’t give them a chance to work things out. By the end of the episode, however, Chase finally makes a move in the right direction toward an apology. Emmy, however, does make it very clear ignoring her calls and texts is not the solution to the problem.

Prior to making things right, Chase tries to bake a cake for Emmy. He plans on baking a heart-shaped cake. Todd happens to be in the kitchen when the cake comes out of the oven. When Chase takes the cake out of the pan, it more or less crumbles. Todd jokingly asks if Chase was trying to make a broken heart cake. Unlike his motherr Julie Chrisley, Chase does not seem to be too great with baking. Cause, if he was, he nailed it.

Chase tries to cover the broken cake with tons of icing. But, Todd points out he’s only making a bigger mess. This is when Julie and his sister Savannah enter the conversation involving Chase Chrisley’s baking skills.

She offers her son baking advice

Julie Chrisley asks Chase if he let the cake cool before removing it from the pan. He didn’t. Turns out, that simple mistake is why his cake crumbled. She notes you have to let it cool before you remove it from the pan. As we mentioned previously, however, Todd seems to think the whole venture is pointless. He doubles down on thinking Chase just needs to buy Emmy something instead.

Even Savannah agrees no one is going to eat anything he bakes. This thinking holds true when Chase insists he baked the brownies he brought to the picnic to finally apologize to Emmy. The expression on Emmy’s face makes it clear she didn’t believe Chase baked the brownies. And, if he did bake the brownies, she wasn’t sure she wanted to taste them. So, she was surprised they tasted alright.

Overall, fans were just happy Emmy and Chase managed to make up. Did you think Julie offering her son Chase Chrisley baking advice was sweet?

Have you had a chance to watch the Chrisley Knows Best Season 8 Finale yet? Stick with us at TvShowsAce for the latest Chrisley-related news!

No Longer Boy Crazy? Scheana Shay Gets The Life She Wants
Not Lindsie Chrisley’s Real Father? Todd Kills With Kindness In Response
Will There Be ‘When Calls The Heart’ 2021 Christmas Movie?
Molly? Tori? Who The Heck Is Pushing Lilah Roloff At The Zoo?!
‘Love After Lockup’ Spoilers: WAIT! Doug Cheated On Rachel The Whole Time?