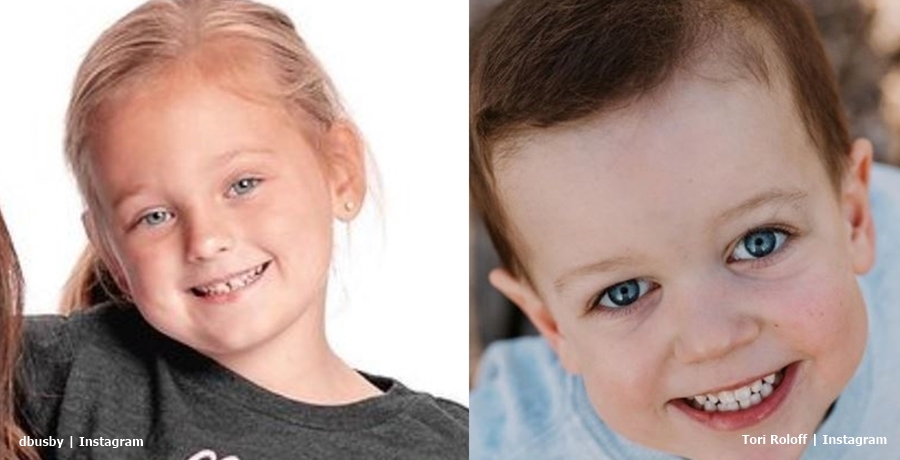 Ava Busby twins with more than her sister Oliva. The cute kid from OutDaughtered also shares a passion with Jackson Roloff from TLC’s LPBW! Well, that seems like a rather sweet crossover between two very popular kids on the network. Fans adore Ava, although they sometimes confuse her with her sister. Likewise, young Jackson, the son of Tori and Zach also charms his many fans. So, where could these kids find something in common? Read on to find out.

OutDaughtered fans usually talk about Riley when it comes to animals. In fact, the Busby quint seems fearless when it comes to lizards and frogs. Plus, she confidently handles things that nip, like crawfish. While all the girls seem interested in nature and animals, Riley seems way more passionate about them than her sister Ava. TLC fans predicted that Riley might end up with a career working with animals. It came after her dad Adam talked about her  love for “creepy, crawly and slimy stuff.” Now, it seems that Ava also loves animals: a particular species.

It turns out that Ava Busby twins with Jackson Roloff from LPBW with a love for chickens. We reported in October last year, that Jackson Roloff fell in love with a chicken. Little People, Big World star, Tori told her fans that he called it “Teeter.” On Instagram, she posted up a cute photo of Jackson cuddling Teeter. Tori thought about disinfecting him afterward.

In fact, Jackson loves the chicken so much, that when Christmas came along, he kept on calling out “Teeter” when they collected their Christmas tree.

Danielle shares a photo of Ava with a chicken

On March 25, Danielle shared a photo that revealed Ava Busby twins with Jackson when it comes to a passion for chickens. She’s slightly older than Jackson. However, it seems that their common interest in the birds comes along with deep dedication. In the photo that the OutDaughtered mom shared, Ava stood there clasping a chicken to her chest. In her caption, Danielle mentioned that she took the shot when the kids attended a “birthday party last week.” Additionally, she noted that her daughter was “determined to catch a chicken! ” And, she “she finally did it!”

Actually, Ava Busby twins with Jackson with that giant smile on her face as well. InTouch Weekly talked about how fans love a TLC crossover between the Roloff and Busby families. They reported that Audrey and Danielle are good friends. Actually, that might mean that Ava meets Jackson one day. For all TLC fans know, that might have already happened between the LPBW family and the OutDaughtered kids.

What are your thoughts about Ava Bubsy who twins with Jackson Roloff when it comes to a passion for chickens? Do you think it’s the cutest TLC crossover? Sound off in the comments below.

Jo Shannon Unimpressed As Geno Messes Up In ‘Mama June’ Preview
‘The Bold And The Beautiful’ Spoilers: Do Bill and Liam Get Caught?
Will There Be A Season 3 Of Netflix’s ‘Glow Up’?
‘My 600-Lb Life’ Update on Sarah Neely: Where is She Now?
‘Temptation Island’: Did Thomas Leave The Island With Sophia?