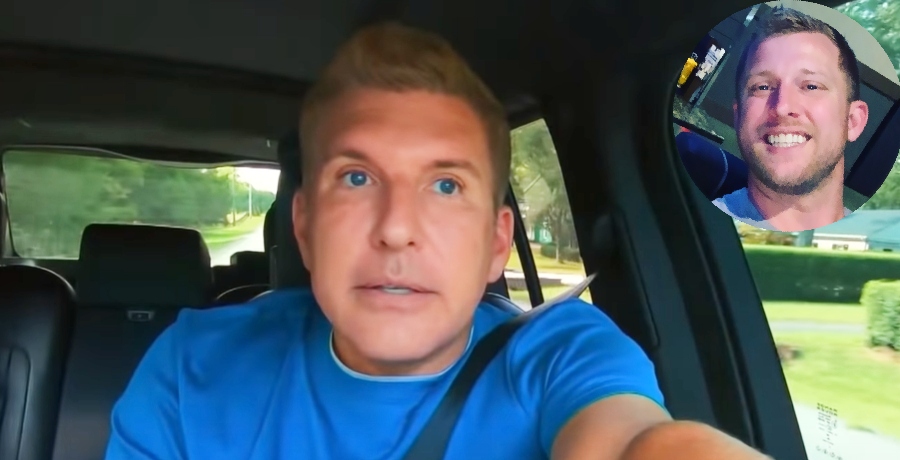 Kyle Chrisley will make an appearance in the Season Finale of Chrisley Knows Best tonight — many fans wonder why he left the show to begin with. Unfortunately, only Kyle and his father Todd Chrisley know the full story about why his oldest son walked away from the show. But, we did do a little digging. Here’s what we know about Kyle’s exit from Chrisley Knows Best.

Those who have watched Chrisley Knows Best since the series debuted in 2014 met Todd’s oldest son Kyle before. He appeared during Season 1 of the series. At the time, he was struggling with addiction. Kyle Chrisley was fighting to turn his life around. He wanted to do better for his daughter Chloe.

Unfortunately, Kyle was not able to shake his addiction. It returned by the end of Chrisley Knows Best Season 1. Todd, in turn, revealed his strained relationship with his son Kyle. As those who follow the series know, Todd shares Kyle with his first wife Teresa Terry. Before too much time passed, Todd’s relationship also became strained with his oldest daughter Lindsie. Today, we know Lindsie has zero relationship with Todd Chrisley. We, however, know she does remain in contact with her mother Teresa.

Now, Kyle Chrisley struggled with drug use and domestic violence allegations for years after Season 1 of Chrisley Knows Best concluded. He didn’t have a good relationship with his father. He was even arrested several times.

In September of 2019, Kyle Chrisley was rushed to the hospital after attempting suicide. He, however, did reconnect with his father. Their relationship no longer strained.

During Season 1 of Chrisley Knows Best, Todd Chrisley revealed to fans he sent Kyle away. He sent him to do volunteer work in Africa. This was after he learned his son was using drugs. In 2014, things became heated between Kyle and Todd. Kyle Chrisley accused Todd of stealing his daughter Chloe from him. At the time, Todd had gained full custody of Chloe Chrisley. This happened when she was just two-years-old. Today, Todd and Julie retain custody of Chloe Chrisley. They are the only parental figures she’s really known since she was very small.

Kyle Chrisley Reveals His Hospital Stay Was For Suicide Attempt

“My dad showed no interest in Chloe at all until the show and until it was pointed out that having a mixed race child and getting her and all that would be good for his demographic,” Kyle accused during an interview with The Daily Mail.

At the time the interview happened, he was stable. He was not doing drugs. And, he was happily married to his wife at the time — Alexus Whilby. Today, we know Kyle Chrisley is no longer married. Alexus is not in the picture at all. Kyle, however, remains stable. And, he’s engaged to be married to his girlfriend Ashleigh Nelson.

In 2014, Todd seemingly responded to the interview via Twitter.

My son Kyle is bipolar, he suffers from mental illness, he will struggle for life, Yes, the Daily mail prayed on this to sell a story..

According to TMZ, Kyle Chrisley’s former wife alleged he made death threats toward her via text message back in January of 2019.

“[N]ot before I end you. Im going to the streets I will get my sh** and take care of this problem with you because if I’m not with you nobody will be. Bye Alexus.” She alleged the texts read.

She responded to the text informing Kyle that was a threat to her life. Kyle allegedly responded confirming it was, in fact, a threat.

Fans know the couple’s relationship dated as far back as December of 2014. It was then that Todd accused Kyle’s former wife of trying to extort the family via Twitter.

Folks, Alexus Whilby tried to extort our family 4 20k or tell the press we r racist, we chose 2 keep the 20k and see her in court. #slander

Unfortunately, there don’t appear to be any updates regarding whether Todd ever took legal action against Kyle’s former wife.

He confirmed he supported Todd and his stepmom two years ago

It was in August of 2019, that Kyle took to Facebook to confirm he supported his stepmother and his father. It was around the time Julie and Todd were dealing with their legal tax issues.

My mom [referring to his stepmom Julie Chrisley] and dad raised me. I haven’t been the best dad to Chloe, I’ve had a problem with drugs, I’ve acted completely ridiculous and through all that they have stood by my side. Nine months ago, I went to my dad with an apology. His words were ‘I love you always, and you are forgiven’ and just like that I was welcomed back into his life with open arms. I will be forever grateful for his love [and] graciousness.”

Taking a closer look at the timeline and background information, there were a lot of reasons why Kyle Chrisley walked away from Chrisley Knows Best. For starters, he wasn’t in a good place in his life. And, he didn’t need the stress of a reality TV series.

Likewise, the money he would have made from remaining on the show would have likely fed his drug habit at the time. While he fought to put his life back together, it also likely wasn’t ideal for Chloe to see her father as he spiraled to rock bottom.

Chrisley Knows Best fans would love to see Kyle in future episodes of the series. But, it really comes down to whether that is in his and Chloe’s best interest. Likewise, he may not want to step back into that kind of spotlight. After all, it’s easy for reality TV stars to slip back into bad habits when they are in the spotlight.

Either way, we will get to see Kyle Chrisley during the Season 8 Finale of Chrisley Knows Best tonight. And, fans are VERY excited about this.

Did you know why Kylie Chrisley walked away from the show? Do you think he’ll be in future episodes? Share your thoughts with us in the comments.