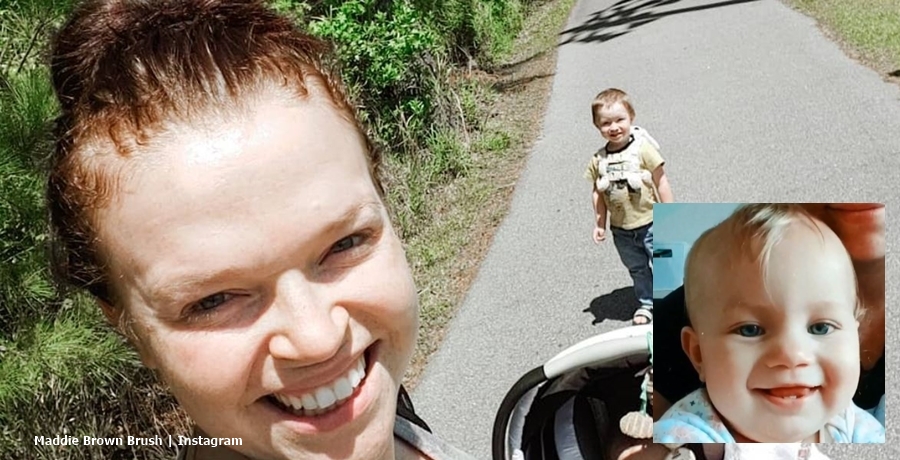 Maddie Brown Brush from Sister Wives seems thoroughly delighted with her daughter, Evie K. She seems like such a happy and smiley kid. TLC fans also love her to bits. Of course, all of the Sister Wives fans now know that Evie K faced problems with her FATCO syndrome. As they saw her birth progress on TLC, fans feel a special bond with her. However, her mom seems more than just happy with Evie, she sounds in awe.

We reported that the Sister Wives star shared a cute photo of Axel and Evie K playing together. It came in mid-March, and she loved it. The two kids sat together looking at a storybook. Maddie said, “I love that they are getting to the age where they play with each other! 💛”  Certainly, she sounds very proud and happy for both of her children. Plus, the fact that Axel adjusted to being a brother so well must bring her a lot of relief. After all, it worries people when they bring in a new child. Sometimes, the older child feels a bit put out by the new interloper.

Fans who don’t follow Maddie Brown Brush on social media, really only “become aware of Evie K’s FATCO syndrome at the beginning of Season 15.” We noted that “in the Evie introduction episode, Maddie explains what is going on.” Essentially, it boils down to a person “missing bones.” Janelle Brown listed some of the issues that Evie faced. However, in real life, Evie already underwent a Boyd amputation and a fitting for a  false foot. Now the cute little kid gets around fine and she explores her world with gusto. And on social media, fans love keeping up with her antics.

The latest photo comes with a nice caption, Maddie’s in awe

On Wednesday, March 24, Maddie Brown Brush took to Instagram and shared another photo of her daughter. She sat at a table and enjoyed a bite to eat. Her blue eyes matched her blue outfit. And as usual, she smiled that beautiful smile that fans become used to seeing. Proudly, her mom wrote, “Do you ever just look at your kids and think, “Wow! I made that?” 😍💛😊.” Probably, only a mom can relate. And some of those people responded in the comments section.

Here’s what some fans of Maddie Brown Brush said to her:

Other fans of Maddie Brown Brush who didn’t yet produce their own kid said that Evie K looks “precious” and very “cute.”

Like Maddie from Sister Wives, did you ever look at your kids and feel some sort of awe that you produced them? Sound off your thoughts in the comments below.