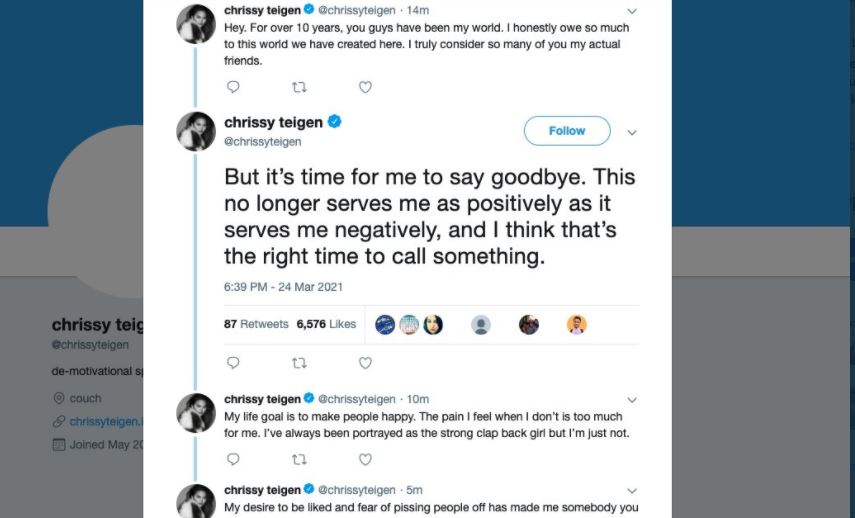 Teigen is the forthright famous model wife of musician John Legend. She shared her life in open posts online with regularity, and she famously used a mixture of honesty and humor detailing her everyday life as a mother.

She also promoted her ongoing projects and causes as many celebrities do on the popular website.

“We are shocked and in the kind of deep pain you only hear about, the kind of pain we’ve never felt before. We were never able to stop the bleeding and give our baby the fluids he needed, despite bags and bags of blood transfusions. It just wasn’t enough,” she Tweeted out and also shared the images on Instagram, as she showed her and Legend grieving their lost child, cradled in her arms.

In February 2021, Teigen was called out for a tweet she shared over an expensive bottle of wine “accidentally” ordered. The chatter was mostly negative over her obliviousness that most of the country was hurting financially from the COVID pandemic.

Now, Chrissy Teigen has shared that Twitter “longer plays a positive role” in her life.

“For over 10 years you guys have been my world,” Teigen wrote to her 13.7 million followers this week.  “But it’s time to say goodbye. This no longer serves me as positively as it serves me negatively, and I think that’s the right time to call something.”

Regarding the comments on her social media, Teigen said she was “deeply bruised.”

Supermodel Chrissy Teigen and John Legend met in 2006 on the set of Legend’s music video for Stereo.

They married in 2013. In 2018, Teigen celebrated the couple’s fifth wedding anniversary on Instagram and called Legend “the man of my dreams.”

“We have two babies and some pups and a life I am grateful to have,” Teigen wrote in the caption. “My everything, I love you and am so proud of the story we’ve created.”

The couple has a daughter and a son, Luna and Miles.

Teigen is an author