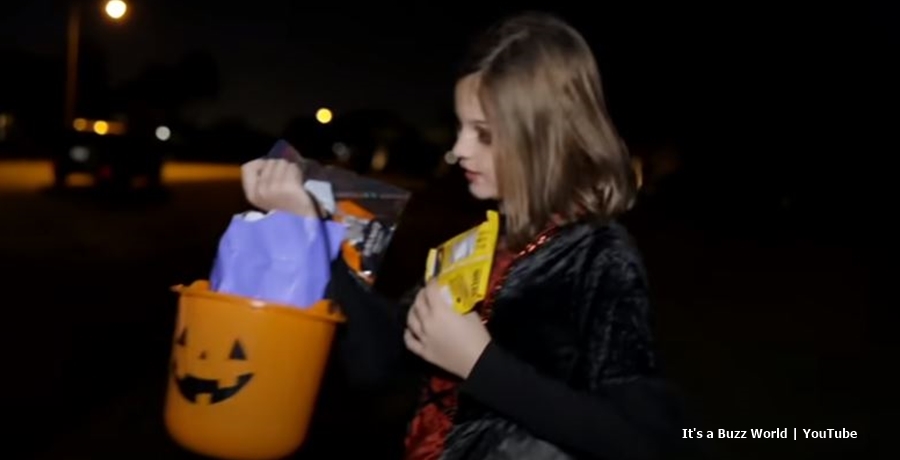 OutDaughtered just aired the Halloween episode on TLC and it caused some confusion for fans who think it was edited for the show. In fact, they suspect some fibbing went on. That comes because they already saw posts about it on social media. Plus, Adam actually shared a vlog about Halloween on his YouTube last year. Perhaps the producers tried to avoid criticism from fans about social distancing.

We reported late year, that Adam and Danielle Busby shared some photos of the kids at Halloween. The family, with the exception of the twins, Ava and Olivia, looked scary. Hazel especially looked really cute in her skeleton costume. Meanwhile, TLC fans really liked Riley dressed as a blue-eyed witch in black. Actually, we noticed that it was the first time that Danielle and Adam opted for a traditional scary-style event. That might have something to do with their Christian beliefs.

Later, Adam Busby made a video which he posted to his Vlog on YouTube, It’s a Buzz World. In the video, it showed the OutDaughtered girls all getting ready to go trick-or-treating. Later, the family met up with family and friends, and off they went down the street. The kids carried buckets and bags for their treats. It all looked very wholesome and fun. When it got dark, the kids were moved around by car and then they enjoyed more trick or treating. However, that’s not the story that TLC presented.

TLC reveals no trick-or-treating because of the coronavirus – a few fibs going on?

In the OutDaughtered episode that aired this week on TLC, Meaww reminds fans that they saw the same costumes that Adam shared. So, it’s definitely the same Halloween. The show notes that the kids could not trick-or-treat because of the virus. So, Adam wanted to make them a scary haunted house at home. Finally, he made some mazes, and Uncle Dale and his family came over. There, in the safety of their yard, the family enjoyed their special Halloween.

Over on Twitter, some OutDaughtered fans seemed confused. While others noticed those fibs, as well.

#OutDaughtered I am really confused by this episode since we already know they went Trick or Treating plus bought the costumes at Spirit.

Another fan commented that probably, the producers hid the trick or treating from the audience because of social distancing controversy.

I’m guessing the whole hiding Trick or Treating was TLC’s way to avoid criticism but it’s just silly in my opinion. Different states had different regulations. People Trick or Treated in Florida too.#OutDaughtered

You can watch the vlog that Adam posted on his YouTube, below:

What are your thoughts on the fact that the  OutDaughtered episode said that the family did not go trick-or-treating because of the coronavirus? But in fact, in real life, they did. Sound off your thoughts in the comments below.

Colton Underwood Details Struggling With Suicidal Thoughts Before Coming Out
‘The Bold And The Beautiful’s’ Karla Mosley To Replace Mishael Morgan At ‘The Young and the Restless’
‘GMA’ CRUCIFIED For Airing ‘Stalker’ Colton Underwood Coming Out
Is Michael Halterman Putting On Weight? These Pics Have Fans Concerned
Source Says These Duggar Family Announcements Are Coming Soon