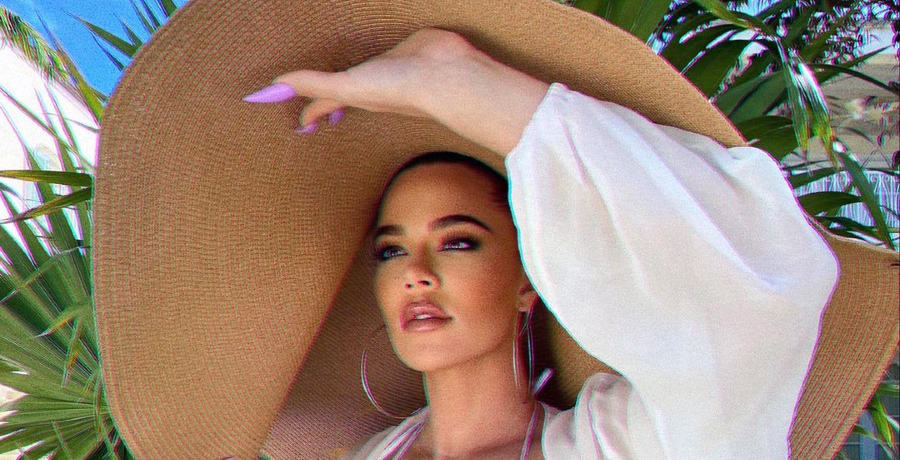 Khloe Kardashian addressed some of the negative attention she’s received lately. The Keeping Up with the Kardashians star got backlash for her relationship with Tristan Thompson as well as her ever-changing looks. In a never-before-seen clip for the upcoming episode, she addresses her relationship. This comes after Tristan confirmed that they’re back together.

The couple rekindled their relationship last summer after spending months in quarantine. While Tristan made it clear they’re back together, Khloe isn’t ready to let the world know. In the sneak peek for Thursday night’s episode of KUWTK, the Good American founder speaks with Scott Disick about a comment on one of her Instagram posts.

Khloe Kardashian “embarrassed” about her relationship with Tristan Thompson?

The 36-year-old was bothered by one particular comment. In August 2020, Khloe Kardashian posted a bikini photo to promote her clothing brand. At the time, Scott posted that Tristan was a “lucky man,” which caused attention among fans. This also fueled the speculation that the two were back together.

“Scott, I got a whole lot of action this weekend from your little comment you made on the ‘gram,” she said with a disappointed look on her face.

Khloe claimed she was “bombarded” with texts and calls about the status of her relationship with the Celtics star.

“Honestly, me and Tristan are figuring things out,” she says in her confessional. I’m still trying to navigate my way through my feelings and that’s how I want to keep it. I decided to delete Scott’s comment just to try and get rid of all this unnecessary drama.”

Khloe wants to keep her relationship with Tristan private. But Scott and her older sister, Kim Kardashian, think she’s being too protective. They feel that she doesn’t owe anyone an explanation.

“Finally this guy is being a really good guy,” Scott says. “On the flip side, yes Tristan f***ed up, but what about him? There’s got to come a point where he doesn’t want to feel like you’re embarrassed of him still.”

KUWTK star addresses the comments about her face

Khloe Kardashian is opening up about the constant comments she gets about her appearance. While she’s used to the haters and online trolls, she wants to have a positive mindset. The Instagram influencer doesn’t want to have that kind of negative energy in her life. Even those comments can take a toll on her personally.

Shortly after a user posted a TikTok video in Khloe’s defense after the headlines about her new look, she shared her thoughts about online “bullying” in the comments.

“I am so very grateful and appreciative of anyone who stands up to bullying or people writing story’s [sic] simply for clickbait,” Khloe wrote in her lengthy comment. “Defending someone, Especially when we don’t know one another makes [my] my heart happy. That’s the person I am. I like to defend what is right. Thank you, everyone, for you [sic] sweet comments, and thank you @mackincasey for being so kind.”

When Khloe announced her new collaboration with Ipsy, fans were more focused on her appearance. Some of them exclaimed that she was barely recognizable. Others thought she went under the knife again. But Khloe hasn’t really addressed those comments until now.

What are your thoughts on what Khloe said? Sound off below in the comments.