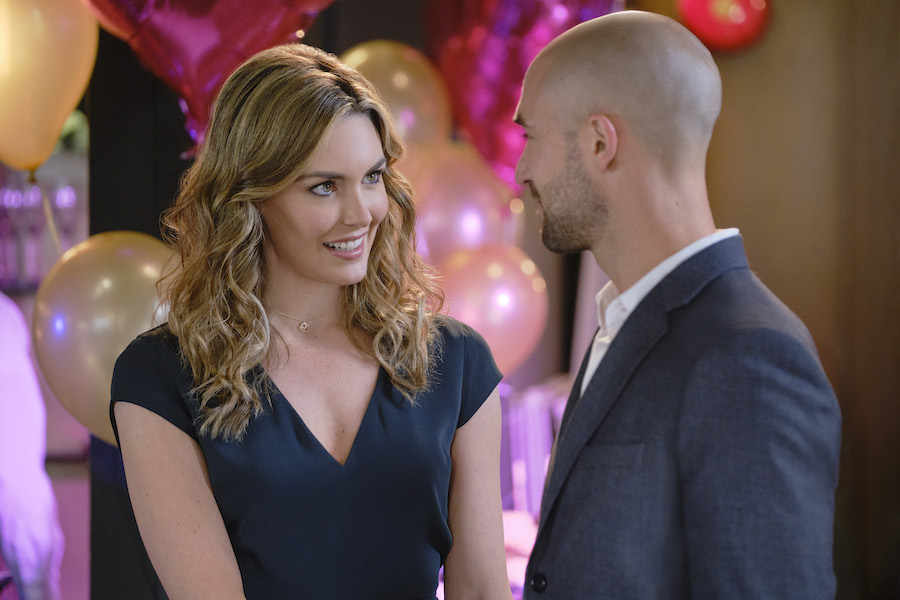 What Is Hallmark’s One Perfect Wedding About?

This is the third movie in the One Winter trilogy, what is it all about? According to the Hallmark press release, with Cara (Cole) leaving on an international book tour in two weeks and Ben’s (Turner) business expansion keeping him busy, the couple decides they won’t let work commitments postpone their nuptials any longer.

So, they book the Clara Lake chalet and head back to where their romance began. They want  a small, intimate wedding with friends and family. The catch is that it is just 10 days away. Thankfully, with the help of their best friends Megan (Bernard) and Sean (Williams), Cara and Ben feel nothing can stop them from having the perfect wedding.

However, Cara is left wondering why Ben is being secretive. Turns out, Ben is struggling to help Sean with important life plans, but from a long distance. Also, Megan’s enthusiastic attention to every wedding detail makes things crazy. Subsequently, there are a few misunderstandings and mishaps along the way.

Add in a Clara Lake mystery that Cara is determined to solve, and this will be a wedding weekend they’ll never forget.

When Can You Watch Hallmark’s One Perfect Wedding?

In addition, Hallmark will be airing each of the first two movies in the One Winter series. Both will be broadcast on Friday, April 2. One Winter Weekend will air at 12 p.m., and One Winter Proposal at 2 p.m. Eastern.

It Started With Hallmark’s One Winter Weekend

The first of the Hallmark trilogy is One Winter Weekend. This is the movie that kicked it all off. According to the IMDb synopsis, Cara, a women’s magazine writer who gets burned by her boyfriend on New Years’ Eve, decides to go on a dating detox. Challenged by her employer to write about it, she hopes a spontaneous ski getaway with her best friend will spark inspiration.

Complicating matters, they discover they’ve double booked their chalet with two eligible men. One of those guys includes Ben, an entrepreneur. When the share-mates get snowed in, Cara and Ben are thrown together. You know what happens next!

Will Hallmark air One WinterWeekend? Yes. However, it airs only once, on Friday, April 2, at 12 p.m. Eastern

One Winter Proposal Is Second In Trilogy

Hallmark’s One Winter Proposal is second in the One Winter movies. According to the Hallmark synopsis, Old flames are reignited and current flames burn brighter when the fan-favorite foursome reunites at the ski resort where it all began.

One Winter Proposal airs only once, on Friday, April 2, at 2 p.m. Eastern.

Why Isn’t This Called One Winter Wedding?

How did a movie from Hallmark’s One Winter trilogy end up as a Spring Fling movie? Was it Covid-related? It doesn’t sound like it. Originally, it sounded like the third movie would be a Winterfest movie. At the 2019 Hallmark TCA Event, Taylor did confirm that they would make the third movie. Moreover, it was called One Winter Wedding.

However, something between late summer and the fall certainly changed. In late 2019/early 2020, Jack Turner filmed a Winterfest movie with Italia Ricci and Chad Michael Murray. This was Love In Winterland. Then in January, Taylor filmed Matching Hearts with Ryan Paevey, a Love Ever After movie. This certainly confused fans. Moreover, what happened to One Winter Wedding? We just do not know what happened.

Now, in 2021, Winterfest has been changed to New Year, New Movie. So, One Winter Wedding doesn’t exactly fit that. Thankfully, they still made the third movie and it will premiere on Saturday, April 3, at 9 p.m. Eastern, on The Hallmark Channel.