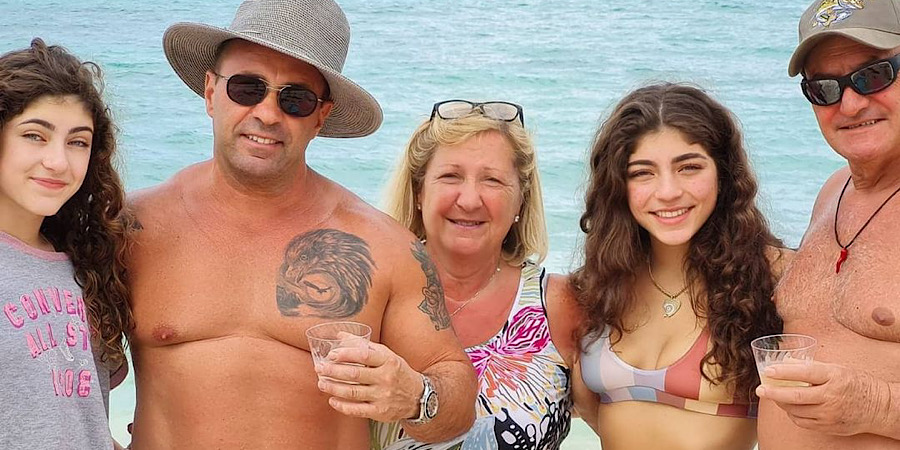 Milania Giudice channeled her RHONJ mama, Teresa while reuniting with dad, Joe in the Bahamas. Along with her three sisters, the Giudice girls were reunited with Joe for the first time since November. He was deported to Italy after being released from jail and a stint in ICE back in October 2019. The family was reunited on television when Teresa and her daughters flew to Italy to visit Joe. However, it did not end the way Joe had hoped and viewers watched it play out.

Fans of the Bravo show have followed the Giudice’s highs and lows for twelve years. In 2009, the same year RHONJ premiered, Teresa and Joe filed for bankruptcy. Four years later, they were charged with various counts of fraud. Teresa was sent to a Danbury, CT prison for a little under a year. Joe followed upon her release for forty-one months. Since he is not a United States citizen, he faced deportation. He fought and filed several appeals because it was what his daughters wanted.

During this, Teresa’s mother passed away. She resented Joe because she believed his crimes robbed her of extra time with her. Luckily, her father moved in to help care for Teresa’s daughters so they had a male role model in the home. Teresa was very open that she did not think she could stay with Joe if he got deported.

Instead of getting released, Joe was transferred to an ICE facility. Undoubtedly, this was mentally and physically draining. He ended up going home to Italy, where he was born. The reunion between him, Teresa, and their four kids was documented in Season 10 of the Bravo series. Sadly, Teresa had too much pent-up frustration towards her husband. She ended the marriage at the end of the trip, leaving him heartbroken. The divorce was finalized in September of 2020.

Milania took Joe being away from them the hardest. She was a true daddy’s girl but optimized her time by recording a single. While he was in prison, she grew up a lot and became a woman. While visiting the Bahamas with sisters Gia, Audriana, and Gabriella, Instagram followers noted how much she looked like her mom. Joe posted a family photo and with her dark wavy hair, the resemblance was uncanny. In a photo from last year, Teresa and Milania are twinning.

This reunion was needed after some of their time together was postponed. Joe was supposed to see them last Easter but it was canceled due to COVID. Luckily, they were able to get together in the Bahamas this time around and Joe seems the most grateful. In his posted pictures, he has captions like: “Nothing like family.”

Joe was shown on the recent episode of RHONJ as he and Teresa were discussing the ease of their divorce. She has since moved on with a new beau and is currently selling the family home. Joe has been pitching a new reality show in Italy. No word on whether it has been picked up yet or not.

Does Milania resemble her mom or is she her dad’s daughter? Leave comments below and watch RHONJ Wednesday nights at 9 pm only on Bravo.