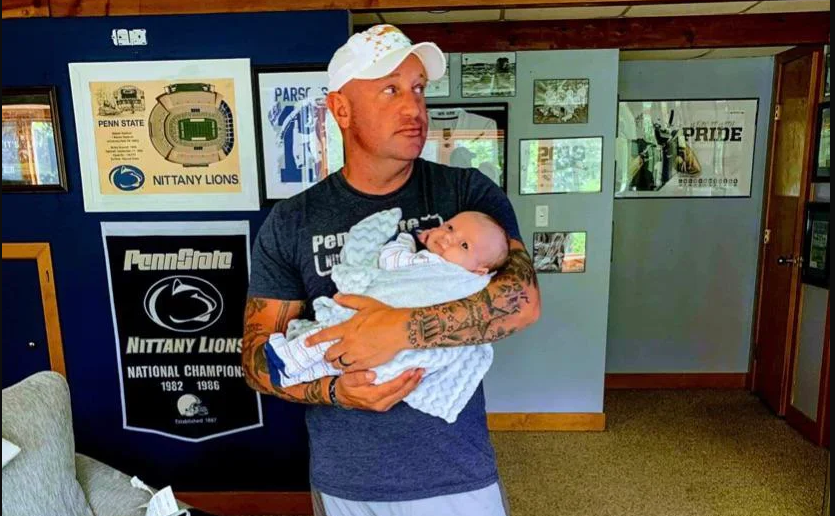 Unexpected fans may have noticed a very subtle bit of network censorship recently during scenes involving Jenna’s father, Matt Ronan. Noticing one of Matt’s tattoos was blurred during the show, fans took to social media to assuage their curiosity. So, Why did TLC censor Matts’s tats? Read on to get all the details.

TLC blurred out a chunk of Matt Ronan’s tattoo sleeve during his episodes of Unexpected. Why? Because the network was doing its best to avoid scandal.

Featured in Matt’s tattoo arm sleeve is a large inking of the roman numeral III surrounded by stars,  a symbol of The Three Percenters group. Why is this such a huge ordeal? Many people associate this group with White Supremacists and Neo-Nazis. While Matt Ronan says this is certainly not the case, it hasn’t stopped people from dragging him on social media and calling him out for being what they feel is an icon of hate.

Who Are The Three Percenters?

The Three Percenters consider themselves an American/Canadian far-right group. They place a heavy focus on militia and have big issues with government control. Anti-Hate groups labeled them as ‘anti-government.’

Matt Ronan and other members of this political group say that couldn’t be farther from the truth.

The group’s name originates from the unpopular idea that only three percent of American colonists actually fought during the American Revolution. They see themselves as a modern version of that ‘three percent’ who have tasked themselves with protecting hardworking American citizens from ‘government control.’

Due to their beliefs being very far right and outside the norm, people tend to lump them in with other far-right groups – some of whom are notorious for their policies of hate, violence, and anarchy. So, while TLC has never made a statement about micro-censoring the tattoo, it’s likely they were looking to avoid any negative reactions from fans. Unfortunately for Matt Ronan and TLC – this is not how things went down.

After seeing the censored tat, fans found Matt Ronan’s page on Facebook. Photos on Facebook were obviously uncensored, which meant that now – fans not only knew about the tattoo, they had opinions. Ronan and TLC both received a lot of complaints and commentary about his affiliation with the ‘extremist’ group, citing racism and ties to Neo-Nazis and White Supremacism.

So, What did Matt have to say? Well, He’s certainly not happy people assume he’s racist. He says that he put himself behind the movement because he ‘wholeheartedly’ believes in the right to bear arms and has strong feelings against what he calls ‘government overreach.’

Ronan stresses that he is not against the government in the least. He is not an anarchist seeking to overthrow the foundation of the government, rather, he is against them having ‘too much’ say in the daily lives of Americans.

Matt addressed the accusations in a Facebook post on his personal page back in January. The post has been removed since then, however, Starcasm was able to capture the verbiage of the post before it disappeared. Originally posted with a photo of his tattoo, Ronan said:

“I’m NOT anti Government for God’s sake I worked for them for 21 years, my entire adult life. I’m NOT part of this group I just believe in those 2 things, that is all. This is America last I checked and there’s absolutely nothing wrong with believing in something and having different opinions. To say I’m a racist or part of a racist organization is absolutely nonsense and I can’t explain how much that angers me.”

“I am not going to apologize for believing in the 2nd Amendment or being against the Government overreaching their powers. If that’s wrong then I don’t want to be right.”

His Thoughts on the Capital Riots

One of the reasons Matt’s tattoo made headlines had to do with the nation’s political turmoil at the time. In January, the nation’s capitol building git ambushed by swarms of citizens not happy with election outcomes. Most involved are through to be part of far-right extremist groups. Known for their distaste for government over-reach, people naturally lumped The Three Percenters in with these more demonized groups.

A fellow Twitter user asked how he could possibly know who was in that crowd, “Maybe anti-Trump people were mixed in,” they commented.

“I don’t care who it was and who they support,” the sports fan insisted, “it’s not supposed to work like that.” Matt’s sentiment told fans he believes violence and hatred are never the answer.

What do you think about the tattoo debacle? Do you agree with Matt Ronan? Tell us in a Tweet! Find us on Twitter – @TVShowsAce