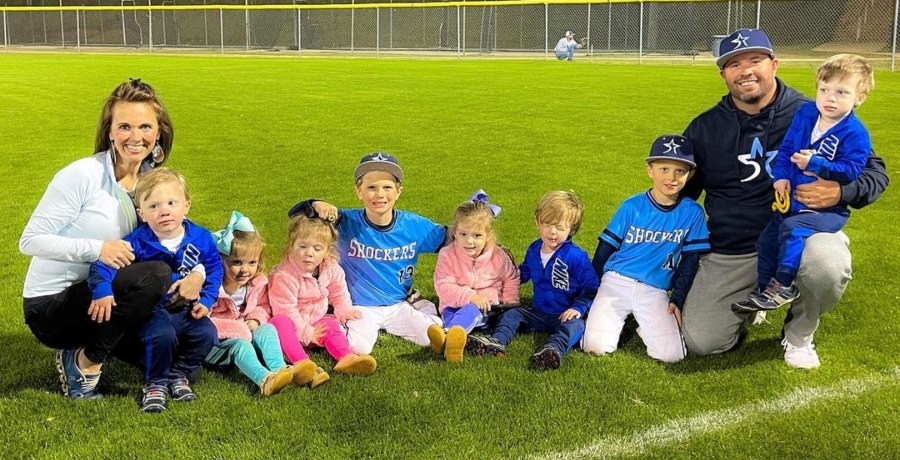 Sweet Home Sextuplets star Courtney Waldrop certainly has a few reasons to smile this weekend. Her twin boys Bridge Waldrop and Wales Waldrop, did her and her husband Eric proud. Plus, the sextuplets were also all-stars as they cheered their big brothers on. Here’s what’s making Courtney Wadrop’s mom life extra special this weekend.

Sweet Home Sextuplets twins Bridge Waldrop and Wales Waldrop are savoring a big win this weekend. Their baseball team won their championship. Both Waldrop boys and their team played well. For their efforts, they were rewarded with the title of champions.

There’s also another reason for Sweet Home Sextuplets mom of nine Courtney Waldrop to be proud. Her husband, Eric Waldrop, coached their sons to victory. Recall Eric Waldrop coaches the teams that the twins and their older brother Saylor Wadrop are on. So Eric is one very busy father.

The Sextuplets Survived The Long Day

It was a long day for the entire Sweet Home Sextuplets family on Saturday. Eric and the twins left for the game at nine in the morning. Then Courtney and the sextuplets joined them at the field close to one in the afternoon. The entire family did not return home until eleven that night. This was a very long day, especially for the youngest Waldrops who were up way at their bedtimes.

Of course, Sweet Home Sextuplets star Courtney Waldrop credits the other baseball moms for her parenting win. She says the other “sweet mommas” helped her. So thanks to them, she and the sextuplets survived the long day. Of course, the all-day-long outing was capped off with a huge championship win for the twin boys—certainly a  fun family day for the entire Waldrop clan.

Sweet Home Sextuplets: This Is A Just A Day In Courtney’s Life

Another chaotic day is in the books for Sweet Home Sextuplets celeb Courtney Waldrop. This was one of her better days. Her sons came out victorious in their season of baseball and now are champions. Her younger six kids were able to make it through the long day of watching their big brothers play baseball without anything going wrong. And of course, coach and dad Eric Waldrop no doubt is brimming with pride for his entire family.

So this is Courtney and Eric’s life. Busy, hectic, and nonstop but full of memories to last a lifetime. Courtney knows she can do things like his. So that gives her a special sense of accomplishment and willingness to do things like this again soon.

Hannah Brown Talked About Living Up To Impossible Standards Of Pageant Life
‘Bachelor’ Matt James Reaction To Reality Steve Calling Him Out
Exclusive: Elaine Culotti Comes Out In Emotional Reveal on ‘Undercover Billionaire’
Source Says These Duggar Family Announcements Are Coming Soon
‘General Hospital’ Spoilers For April 12-16: Will Lying Liars All Be Caught?