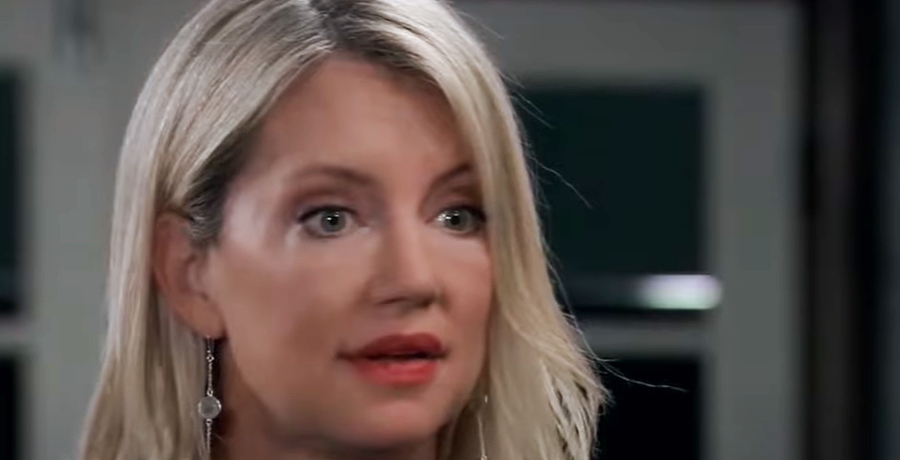 This week on General Hospital, viewers watched as Nina decided that she needed to leave Port Charles for a while. The latest spoilers suggest that her time away will likely lead her to uncover a juicy bit of information. That revelation will leave her with a big decision to make.

For a while now, General Hospital viewers have had a hunch that Nina would be the one to learn that Sonny was still alive. As soon as Sonny ended up at the hospital where Phyllis, Nina’s former nurse, worked it seemed like the writing was on the wall.

Even after all this time, neither Sonny nor Phyllis have figured out he has a connection to Port Charles. As far as they know, his name is Mike. For now, he’s relatively content staying at Phyllis and Lenny’s bar in Pennsylvania. That might change soon.

‘General Hospital’ Teasers Reveal A Surprise Ahead For Phyllis

According to General Hospital spoilers from SheKnows Soaps, Phyllis will get a surprise visit during the episode airing on Friday. It seems that Nina’s first stop after leaving Port Charles will be to spend time with the nurse who cared for her while she was in a coma.

Phyllis recently paid Nina a visit in Port Charles, but now the two will meet in Pennsylvania. General Hospital spoilers indicate that during Monday’s episode, Nina hopes to have a chance to speak with Phyllis. The teasers hint that the worlds of Sonny and “Mike” may collide as a result.

"Mike" is starting to get glimpses of his life before the Tan-O. Is Sonny fighting to resurface?#GH is brand-new and starts RIGHT NOW on ABC! @MauriceBenard pic.twitter.com/Ca8ZK8MxT7

How soon will Nina see “Mike” and how will she handle it? Some General Hospital viewers wondered if the connection would be made when Phyllis visited Nina as Sonny’s family was holding his funeral. That didn’t happen, but it sounds as if Nina’s visit will end differently.

Nina Has A Change Of Heart

During next Wednesday’s show, Nina will have some thinking to do. As she sorts through whatever’s on her mind, she will end up having a change of heart. Does this signal that she sees Sonny and initially decides not to tell Carly or anyone else in Port Charles, but ultimately changes her mind?

Nina will make a decision next Thursday, and as this all happens, Carly will be trying to convince Jax to go after Nina. It would certainly be a truly soapy twist for Jax to learn Sonny’s alive while Nina knows and is keeping the truth to herself.

There had been speculation for a while that Nelle might pop up alive and well at Lenny and Phyllis’ bar. That’s not in the cards, but General Hospital fans still wonder if Nelle’s really dead.