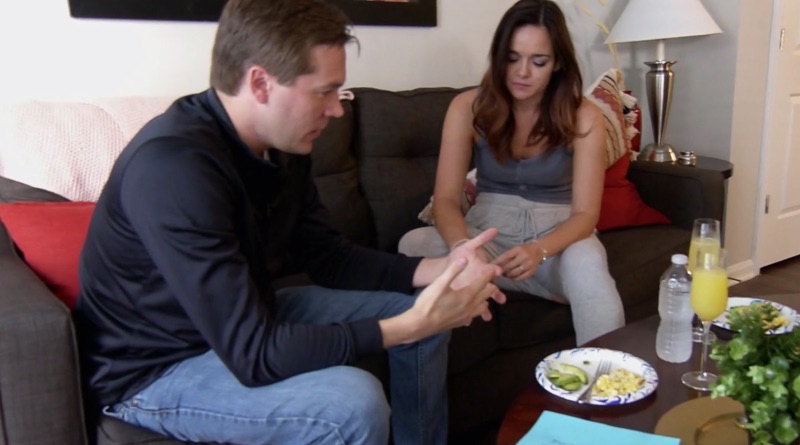 Married at First Sight spoilers show Virginia Coombs keeps it cozy with her exes – and Erik Lake lays down the law. Will the pair be able to get on the same page in their relationship?

One of the things that stands out as a possible red flag for Virginia Coombs and Erik Lake is their age difference. Virginia is 26. Meanwhile, Erik is 34. Age-gap relationships can work for some couples. But even more than just a number, at times, it seems like the Married at First Sight husband and wife are in different places in their lives.

Erik Lake is ready to settle down and build a life on Married at First Sight. Meanwhile, Virginia Coombs still wants to party. And in a lot of ways, she carries herself as though she is still single – even though she is officially married to Erik on the Lifetime matchmaking show.

Erik Lake Lays Down the Law

So far, on the new Married at First Sight season, Erik Lake takes issue with some of his wife’s behavior. He doesn’t like the fact that she has a lot of male friends. And he was uncomfortable with the fact that she regularly falls asleep on their couches after nights of partying. Meanwhile, spoilers say Erik has had enough.

Erik Lake confronts Virginia Coombs about liking an ex-boyfriend’s picture on social media. It’s something that he doesn’t like. At the root of it, he still doesn’t like that his wife is friends with her exes – as well as other male friends. Meanwhile, based on teaser clips for the upcoming episode, this is certainly still a sticking point for the pair.

As Married at First Sight watchers know, compromise is a big part of any new marriage. There’s extra pressure when you marry a stranger – but the concept is the same. Up to this point on their Lifetime journey, Virginia doesn’t seem ready to let go of some aspects of her former life. Because of that, whether or not she will rebel is something to watch moving forward. This is especially true if she starts to resent her new husband for putting down some boundaries.

Will This Be a Deal-Breaker in Married at First Sight Union?

After initial physical chemistry early, there have been some rough patches for Erik Lake and Virginia Coombs to navigate. There are a lot of differences between them when it comes to their lifestyle. Erik is ready to settle down. Meanwhile, Virginia often feels like her new husband wants to control her when he tries to establish some ground rules for their marriage.

Meanwhile, this friction between them adds tension as they get closer and closer to Decision Day. In addition, based on the latest spoilers for the upcoming episode, there’s more of this to come. So, it’s worth watching to see if they can overcome these differences as the marriage experiment winds down.