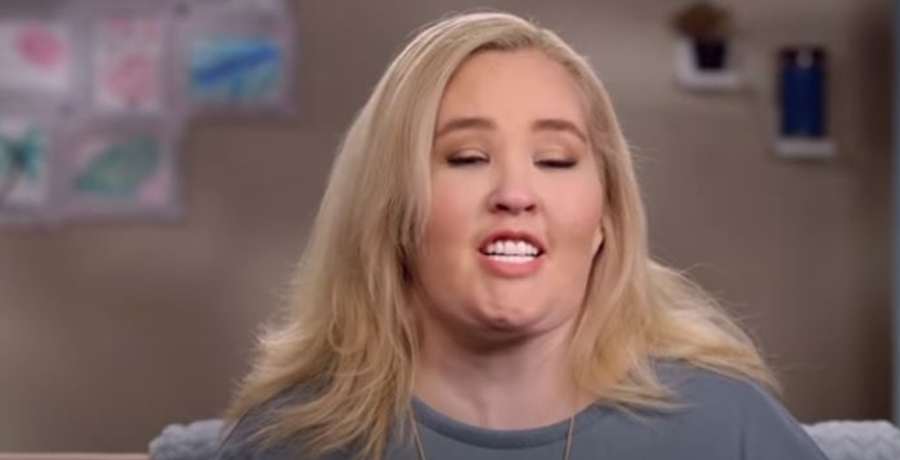 Mama June and Geno reveal massive weight gain recently. But, she believes she knows where to place the blame.

In a new teaser for the return of her reality TV show, June Shannon blames COVID 19 for her massive weight gain. And, Geno Doak actually piled on even more than her. However, judging by the smoothies she whipped up, she obviously suffered from the most serious munchies.

Fans already saw some teasers for the show and it mostly focuses on June’s estrangement. It shows that she went to rehab with Geno. How it affects Pumpkin’s marriage. Plus, Honey Boo Boo cries because her mom abandoned her when she needed her the most. Fans also know that Pumpkin and the rest of the family don’t like that June wants everyone to just pick up right where they left off. Nobody’s rolling out the red carpet. Clearly, June needs to earn the respect of her family. After all, when she ran off with Geno, she devastated the family, and a lot of hurtful things happened. However, Pumpkin also told fans there will be some laughs in the show.

As fans know, in Mama June: Family Crisis, June finally agreed to rehab. And she looked absolutely terrible. She and Geno admitted to spending nearly $3,000 per day on crack cocaine. Probably, that’s why she sold her house and her daughter’s car. In the new teaser, June looks really good as she narrates her story about weight gain. But that came after seven months of sobriety. While she looks like she lost some weight, Geno still looks huge. Plus, in some pre-recording footage June stuffed her face. And in that footage, fans see June blame her weight gain on COVID-19.

Geno even seems shocked as his girlfriend stuffs her face

Access Online shared an exclusive clip on Tuesday, March 16. In their write-up, they explained that Mama June “gained over 60 pounds in quarantine.” Meanwhile, June tells her fans that Geno gained over “100 pounds.” He looks massive as he stands next to the fridge and watches her prepare a smoothie. And, he wonders how much they ate. Meanwhile, prepare yourself for a sight that looks like June works towards a slot on My 600-LB Life on TLC. With her bulging stomach sticking out and wearing what looks like a bikini top, she stuffs herself.

Mama June grabs sprinkles and sauces, and whatever she can get her hands on, and prepares a smoothie. Meanwhile, she tips up the sprinkles package and pours it down her throat. And slurps straight from a sauce bottle. Geno tells her she’s “not making a smoothie,” she’s “making a milkshake.” No worries, June grabs some candied cherries and dips them in the sprinkles, and swallows them down with obvious delight. Not done yet, she gets into the ice cream carton.

Probably, one of the laughs that Pumpkin promised came when Geno commented. June said she blames it on the “healthy COVID way.” He replies saying, “How much COVID did we eat?” You can see the full teaser for Mama June Road to Redemption below.

What do you think of June and Geno blaming their massive weight gain on COVID-19? Sound off in the comments below.

Mama June returns with Road To Redemption in a couple of days. So, be sure to tune into WEtv on March 19.