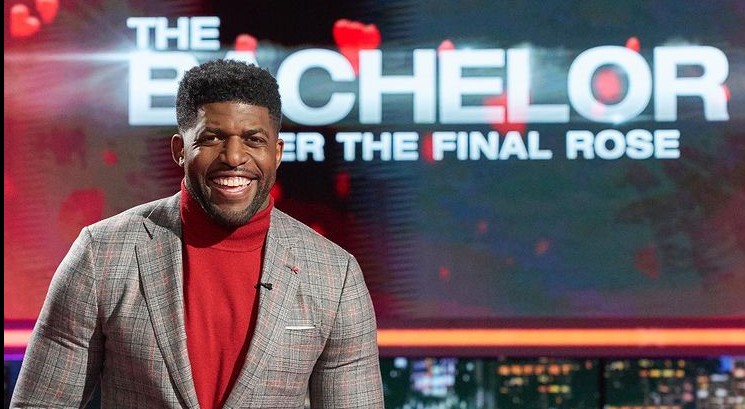 Emmanuel Acho stepped in to host The Bachelor: After the Final Rose in Chris Harrison’s absence. Many thought he did an amazing job and handled the tough conversations well. A lot went into making the hour-long special. In fact, there is a ton of content that never made the aired show. Now that the special has aired, Emmanuel is sharing his favorite moment that wasn’t even shown.

Emmanuel went to social media to share with the world his favorite moment from the show. Plus, it never made it on televisions. The moment involved Rachael Kirkconnell and Michelle Young. He said he could tell Michelle felt hurt by Rachael never talking to her about everything going on. So, Emmanuel decided to try and help them reconcile.

He began his Instagram post saying, “TV time constraints limit you from broadcasting everything you desire.” He continued on saying, “It wasn’t planned nor in the script, but I figured they’re both in the building why not talk it out face to face, plus when I see an opportunity for reconciliation I take it. Thankfully, Rachael was willing, and Michelle hadn’t left yet, so we brought the two out to talk it out! ❤️🌹”

Emmanuel shared his thoughts in the video below.

My favorite conversation from The Bachelor: After the Final Rose, that you NEVER saw due to limited time.

When there’s a chance for reconciliation, always take it! 👇🏾👇🏾 pic.twitter.com/KKBANhdb1t

After the Final Rose took a long time to film

According to Reality Steve, it took more than six hours to film After the Final Rose. There were obviously many moments cut from the show. One huge portion not shown featured Bri Springs. She finished third on Matt James season of The Bachelor.

Following the special, Bri spoke with Rachel Lindsay about it all. Ultimately, she felt disappointed her talk with Matt never made it on air. She said, “I realize that there was probably a lot of content to digest between Matt and his conversations with Michelle and Rachael, and the announcement of two bachelorettes.” Bri continued, “I do feel like I had a great conversation with Emmanuel about my journey … I got good closure from it and I wish people could have seen me reach that conclusion.”

Everyone seemed to have closure from their time on the show. As for Michelle and Rachael, the two poured their hearts out to each other. They then shared an embrace that touched Emmanuel.

By now everyone knows that Matt James remains a single man. He felt after the controversial photos of Rachael surfaced they couldn’t be together.

It was definitely a season for the history books. Stay tuned for more updates.