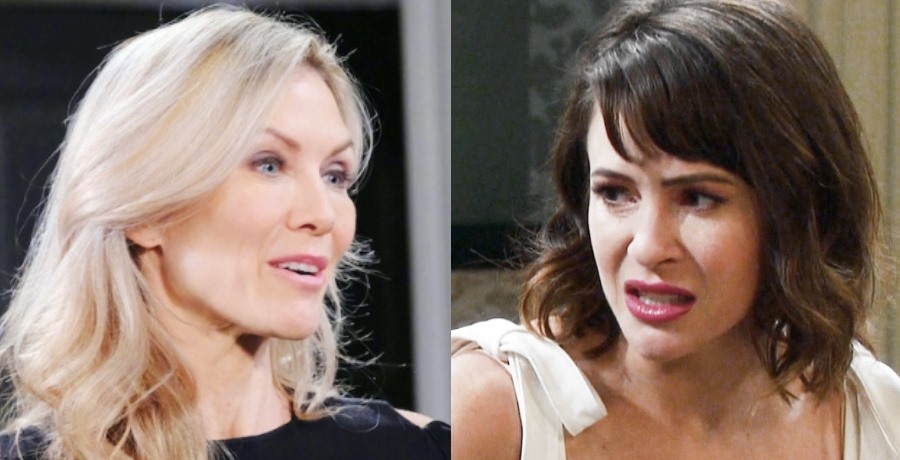 Days of Our Lives spoilers reveal Kristen DiMera (Stacy Haiduk) has diabolical plans for Sarah Horton (Linsey Godfrey). Kristen is taking a page from the DiMera playbook and ridding her life of pesky Sarah Horton. If only Sarah placated and humored Kristen, her fate would be much better.

However, Sarah had to be sassy. So now Kristen wastes no time banishing Sarah to a fate worse than death. Plus, Sarah Horton’s portrayer Linsey Godfrey wraps her three-year run. Kristen’s plans lay the groundwork for Linsey’s departure as Sarah Horton from the canvas on the NBC soap.

Days of Our Lives Spoilers: Kristen DiMera  Makes Good On Her Threat

Days of Our Lives spoilers show Kristen has Sarah held captive in the DiMera tunnels. Sadly for Sarah, she figured out Kristen was parading around Salem as Susan Banks. Rather than keep Kristen’s secret, Sarah decided to take on the Brady Black (Eric Martsolf) obsessed Statesville escapee. Of course, that isn’t going well for her. So Kristen’s backed into a corner and warns Sarah if she fails to keep the secret, she will send her away to an island where no one will ever find her.

In the meantime, Days of Our Lives, spoilers have Kristen donning a Sarah mask and imploding Sarah’s life in advance of her banishment to the island. First, Kristen (as Sarah) accepts a date from Sarah’s ex-husband Rex Brady (Kyle Lowder) and sleeps with him. Of course, Kristen also makes sure Sarah’s groom-to-be Xander Cook (Paul Telfer) walks in and finds “Sarah” in bed with Rex.

Days of Our Lives spoilers predict Kristen makes sure she completely destroys any possibility Xander Cook will care that Sarah’s gone. Kristen will see to it Xander is left with a broken heart. Plus, Kristen will also make sure Rex Brady knows Sarah is over him.

Days of Our Lives spoilers tease both Xander Cook and Brady Black will eventually piece together the puzzle and realize Kristen has duped them both. Then future spoilers suggest the two will team up and look for Sarah — likely without much cooperation or clues to go on from Kristen.

Days of Our Lives: Linsey Godfrey Out As Sarah Horton – Recast Likely?

Days of Our Lives comings and goings confirms Linsey Godrey wraps her three-year run as Sarah Horton very soon. The actress announced her departure yesterday on social media, and Soap Opera Digest quickly confirmed the news. Linsey joined the DOOL cast in March 2018. So her exit likely is due to her contract ending. Neither NBC nor the actress has commented whether the parting was mutual or for other reasons. Certainly, Linsey has made her mark on the character as a recast.

So what’s next for the character of Sarah Horton? For now, Sarah will fail to escape from Kristen’s clutches and will find herself on DiMera Island. This, of course, leaves the “Xarah” love story unsettled. It also allows for a recast for the role. Days of Our Lives no longer films six-plus months ahead, so a recast can hit the screen within six to eight weeks.