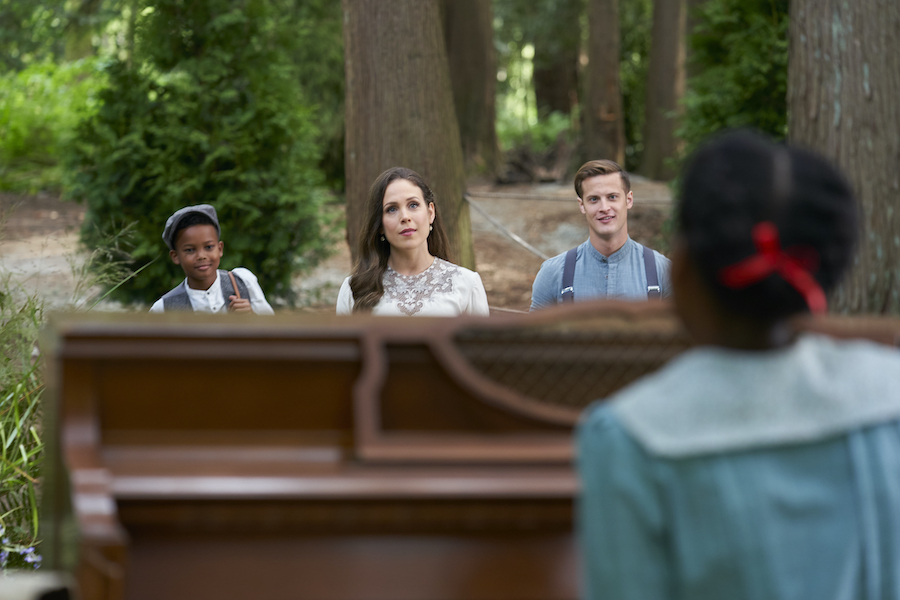 In When Calls The Heart, Season 8, Episode 4, “Welcome To Hope Valley,” Angela plays a song on the piano and Hearties want to know what it is. It may even sound a bit familiar.

What Is The Name Of The Song Angela Plays On The Piano In When Calls The Heart?

In the most recent episode of When Calls The Heart, entitled “Welcome To Hope Valley,” Elizabeth meets the Canfields. In a very touching moment, she sees Angela Canfield (Vienna Leacock) playing a beautiful song on the piano.

Hearties were abuzz wondering what the name of the song was. Rachel, from the Hallmarkies Podcast and Rachel’s Reviews, asked on Twitter, “I know that song Angela is playing on #WCTH is famous but I don’t know what it is. Anyone know? #hearties.”

I know that song Angela is playing on #wcth is famous but I don't know what it is. Anyone know? #hearties

What Is The Story Of Debussy’s ‘Clair De Lune’?

On Sunday, both Elizabeth and Hearties were equally and instantly enchanted with Angela Canfield, in her first When Calls The Heart appearance. She is playing the piano beautifully. The song? Debussy’s “Clair De Lune.” What do we know about the song?

The name of the song, “Clair De Lune” is from an “atmospheric poem” by the French poet Paul Verlaine. This poem is a rather melancholy song that depicts the soul full of music “in a minor key.” This key inspires birds to sing under the “sad and beautiful” light of the moon.

But, according to Classic FM, the song was not published until 1905. That is because Debussy revised and worked on his signature masterpiece for 15 years. So it fits the time frame for When Calls The Heart perfectly. The song was out just about 15 years, and would easily have reached Hope Valley. Moreover, this beautiful song is meant for the solo piano. The performance, like the song, hauntingly breathtaking.

“Clair De Lune” was also a song in the movie Twilight.

We hope you enjoyed tonight’s episode of When Calls the Heart #Hearties. Join us next Saturday at 9/8c for the all new original movie #ChasingWaterfalls part of #SpringFling. pic.twitter.com/poiR6OZpZq

How about the proud papa? The latest Hope Valley newcomer, Viv Leacock, who plays Joseph Canfield, was very proud of his two children on their When Calls The Heart premiere. On Twitter Viv wrote, “I’ve been working in film/TV for a long time. Have been fortunate enough to have worked alongside major Hollywood stars and directors. Watching my children #ViennaLeacock and #EliasLeacock on #whencallstheheart is the best moment of my career. #Hearties.”

The Canfields have now been welcomed by Hearties. Now, what lessons and adventures will they enjoy the remainder of the WCTH Season 8?

Angela’s Piano Playing On When Calls The Heart Pleases Hearties

Be sure to catch When Calls The Heart Season 8, Episode 5, “What The Heart Wants,” on Sunday, March 21, at 9 p.m. Eastern, on the Hallmark Channel.