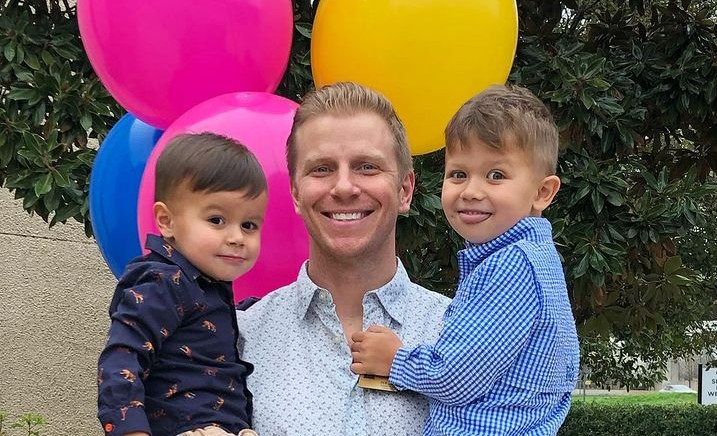 Bachelor Sean Lowe sometimes comes straight out and says things the way they are. And a lot of ABC fans like his forthright attitude. Now they laughed when he forestalled helicopter-parenting criticism. He called complainers “wet blankets.” Actually, his kids looked like they enjoyed a lot of fun, which is nice. Recall, his dog Ellie recently passed away and the whole family felt sad.

Bachelor Sean Lowe had fun with the kids after Ellie died

We reported that when his dog died, Sean and Catherine Giudici shared the sad news on Instagram. An integral part of the family, the old dog featured in a number of family photos. Sean said, “Before Catherine, before my kids, before all the Bachelor stuff, there was Ellie.” And Catherine seemed equally heartbroken, saying she misses the dog already. Obviously, the loss of their pet must have upset the kids as well. However this weekend, he shared some fun clips of the kids having a ball.

Bachelor Sean Lowe came under some scrutiny among Bachelor Nation recently. It all came about after Chris Harrison stepped back after the racism scandal. Monsters and Critics noted that the drama around Sean came back into focus as on the 2013 season of the show, “Sean Lowe…had a plantation date.” Well, Sean’s not wailing with shock and horror by the sound of things. After all, that came a long time ago on ABC. And right now, he just enjoys bringing some fun into the kids’ lives.

Bachelor Sean posted up the clips that showed him bouncing the kids and then throwing them up in the air. Next, they landed on the bed among the duvet and pillows. The sheer delight on their faces made fans smile. But his caption made them smile even more. He wrote, “Before any of you wet blankets say something about how this is dangerous, you should know they both signed liability waivers beforehand so I’m good.” Obviously, he was sarcastic. But fans got the message.

One Bachelor fan said to Sean Lowe, “The best caption ever!! I feel sorry [for] the kids that have to live a bubble.” And another one commented, “Some people aren’t just wet, they’re sopping!😂” One of them just wrote, “Wet blankets 😂😂😂😂😂.” Meanwhile, a lot of fans talked about the fun his boys enjoyed.

One of them commented, “Omgosh!!! The little legs and the JOY! 😍” This one read: “Their faces scream FUN👏🔥.” And many people recalled their own dad playing with them like that as kids.

What do you think of the “web blankets” post that Bachelor Sean Lowe shared? Did you ever play around with your dad like that? Or in your opinion, did it all look way too dangerous? Sound off your thoughts in the comments below.