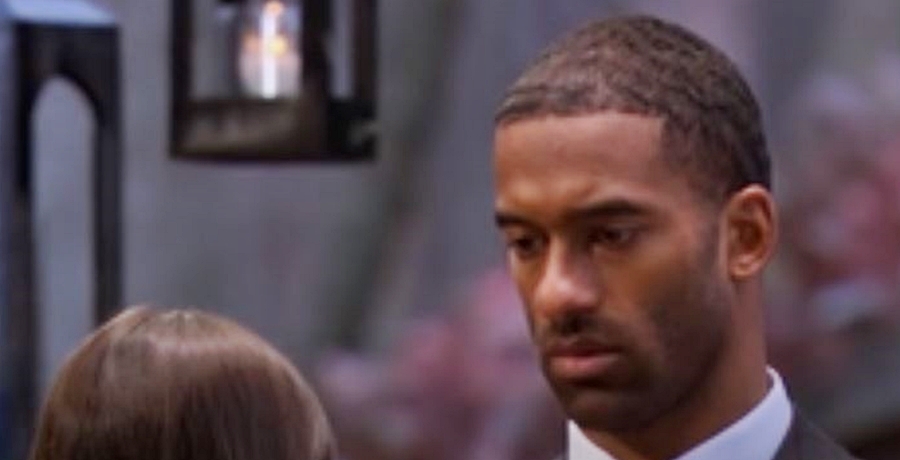 Bachelor Matt James appeared in the finale of the season on ABC sporting a thick beard. Fans hated it. Making it even worse, it looked like he put some glitter in his unkempt, thick beard. Plus, other things that went down also quickly brought comments on Twitter. Like his mom and some thigh-rubbing action. So, all in all, some fans thought it all a bit weird.

On the show, as predicted by his mom, fans felt let down again over a lead who couldn’t make a commitment. It seems like forever since the show found someone with the courage of their convictions. Plus, fans thought he looked way different with his long bushy beard. It seemed really strange that he apparently dusted it with glitter. Overall, it seemed like a predictable ending for many people. But, the weirdness of some scenes brought some awkward moments.

We reported that Bachelor Matt James also rubbed his mom’s thigh as he told her he loved her. It seemed way too intimate a thing between a mom and her son. On social media, some people “agreed it made them feel wildly awkward.” Fans quickly chatted about it in their comments. Many of them noted that the strange thigh-rub seemed bizarre. Especially as he rubbed the female contestants on their inner thigh the same way. As you can see, between the beard and the thigh rubbing, they took away some of the drama from his actual choice.

Who did the lead star with a glittery beard choose?

Bachelor Matt finally chose Rachael Kirkconnell. For many people, that wasn’t a huge surprise as they clicked from the start. However, like others before him, he couldn’t take the next step and actually propose. US Weekly noted that “Matt did not want to lose Rachael… He wanted to leave the show with her and commit to her in that way.” So, he gave her the final rose, but he didn’t actually propose. He seemed to love both Michelle and Rachael. He simply couldn’t take any big step and make up his mind. At least in that scene with Racheal, he lost the beard.

However, the drama seemed to slip-slide a bit as people discussed Bachelor Matt with his glittery beard and his mom. One of them said, “Anyone notice that Matt’s beard was sparkling?”

Then another comment came in which read, “Oh Matt. Maybe shave & get the glitter out. #BachelorFinale #Bachelor.”

#afterthefinalrose #Bachelor is there glitter in Matt James’ beard? Why is it sparkling? Lol anyone else see that?

What did you think of Bachelor Matt James appearing with his huge bushy and unnaturally glittery beard? And, his awkward rubbing of his mom’s leg? Do you agree it all sort of took away from the rather predictable outcome? Sound off in the comments below.