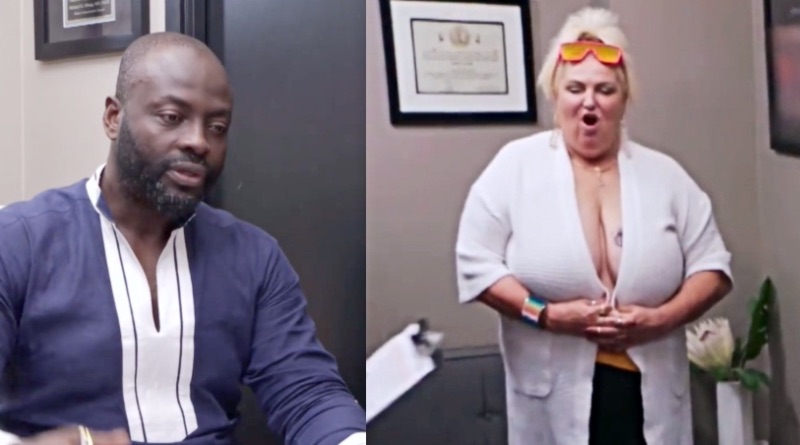 90 Day Fiance: Happily Ever After spoilers show Angela Deem getting hot and heavy with her doctor. Will it make Michael Ilesanmi jealous?

Spoilers for the upcoming 90 Day Fiance season show Angela Deem hitting it off with her doctor. From the looks of it, they get very close. Angela Deem goes in for a consultation for potential weight-loss surgery. And she shows off the goods to her new doc.

Turns out, Angela Deem strips down in the latest teasers for the upcoming 90 Day Fiance spinoff season. Angela jokes in teasers that the first thing she wanted to know about her doctor was whether or not he was married. And there seems to be a twinkle in her eye when he tells her that he is from Ghana. As TLC watchers know, Michael Ilesanmi is from Nigeria – so both men are from the same continent. Meanwhile, both countries are essentially neighbors to boot.

Should Michael Ilesanmi Be Worried?

Watchers know how overprotective Angela Deem is when it comes to her husband. She doesn’t like him talking to other women. And in many cases, she doesn’t like him going out in public if it’s a place where other women might be. Meanwhile, she certainly flirts with her new doctor in the latest 90 Day Fiance teasers.

Angela Deem even tells him point-blank that he is “too handsome” to be her doctor. In addition, it turns out that his name is also Michael. Angela Deem is certainly smitten with him. And she isn’t sure if the universe is trying to give her a “gift” or “get her a** in trouble.” She even jokes that he looks like her husband “from the head up.”

There’s also the fact that all of this goes down with Michael Ilesanmi still in Nigeria. So he may not like the idea of his wife undressing in front of someone she seems to have a crush on. Either way, it’s an extra bit of drama for them heading into the brand new episodes.

Can 90 Day Fiance Pair Trust One Another?

When it comes to this 90 Day Fiance duo, whether or not Angela Deem can trust Michael Ilesami is a recurring topic. Angela doesn’t like Michael’s friends. Meanwhile, she likes to keep tabs on where he goes – and who he is with. So much so that she puts a tracker on his phone on the coming season.

But this time around, it looks like Michael Ilesanmi may be the one that needs to worry about Angela Deem. It’s clear she has a crush on her new doctor – and Michael may not be too happy about it when he finds out. Either way, their relationship will be tested as they continue to maintain it long-distance.