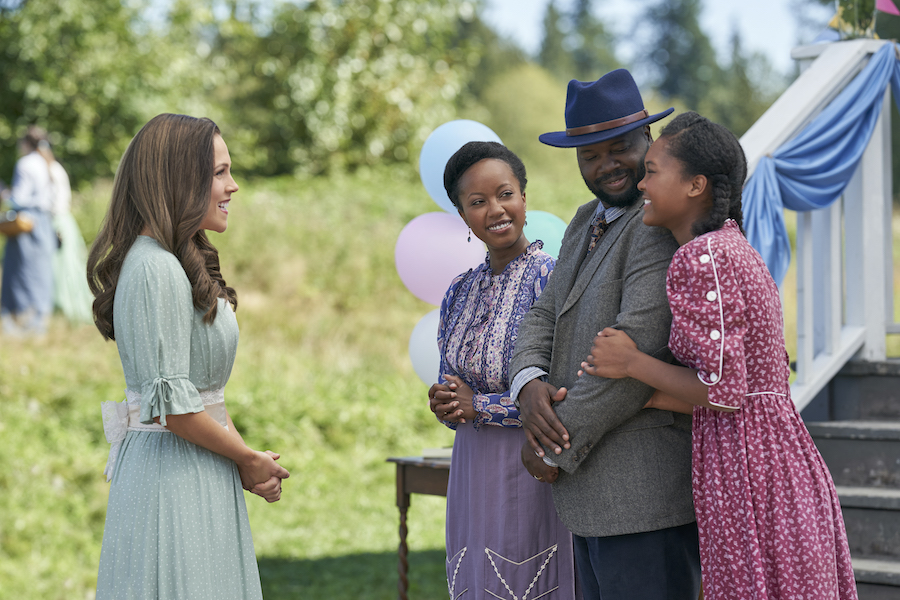 Hearties, are you ready to finally meet the Canfields? In the upcoming When Calls The Heart, Season 8, Episode 4, entitled “Welcome To Hope Valley,” Elizabeth finally meets the entire Canfield family. They have just arrived at Hope Valley.

What do we know about the Canfields? Here is a sneak peek into the next When Calls The Heart episode!

Elizabeth Meets The Canfields In When Calls The Heart

In the When Calls The Heart upcoming episode preview, Hearties finally get to meet the Canfields. The episode entitled, “Welcome To Hope Valley,” introduces all four Canfields to the town of Hope Valley. Elizabeth (Erin Krakow) is getting ready to meet the new family in town. They have two school-aged children. The schoolteacher needs to meet her two new students. She wants to be prepared so that they feel a part of this community.

For example, Elizabeth is previewed talking to Joseph Canfield (Viv Leacock) that she is not experienced in working with a child who is blind, like his daughter, Angela Canfield (Vienna Leacock). Elizabeth is going to run into a lot of issues with Joseph’s wife, Minnie (Natasha Burnett).

Angela has been homeschooled and is under the strictest supervision. Minnie always has her watchful eye on her daughter. Understandably, she is very protective of her daughter. Yet, Elizabeth seems determined to give Angela a sense of normalcy.

However, Cooper Canfield (Elias Leacock), has been introduced to the Hope Valley classroom. He is a bright boy and is instantly part of the tight-knit Hope Valley children.

Joseph Canfield Believes Hope Valley Is Perfect For His Family

Earlier in When Calls The Heart Season 8, Joseph Canfield meets Bill Avery (Jack Wagner). He then explained how he wound up in this magical town. Turns out, Joseph found Hope Valley by accident. He was there to make a delivery. He told Bill, “I liked it so much, I decided to have another look.”

Joseph has some big dreams and they will all happen in Hope Valley. First, he wants to run the town’s gas station. He figures that car ownership is on the rise. He is ready to profit from this inevitable part of the future.

Did you know that the When Calls The Heart cast live tweets when the show is airing? On Twitter, Paul Greene reminds Hearties, “Tweet with us tonight #Hearties @hallmarkchannel @SCHeartHome.”

Greene, Erin Krakow, and even one of the creators, Brian Bird, regularly tweet along with fans. Bird in particular will share some insights into each scene. They include Easter eggs that link back to previous episodes.

Don’t forget to watch When Calls The Heart Season 8, Episode 4, “Welcome To Hope Valley,” on Sunday, March 14, at 9 p.m. Eastern, on the Hallmark Channel.