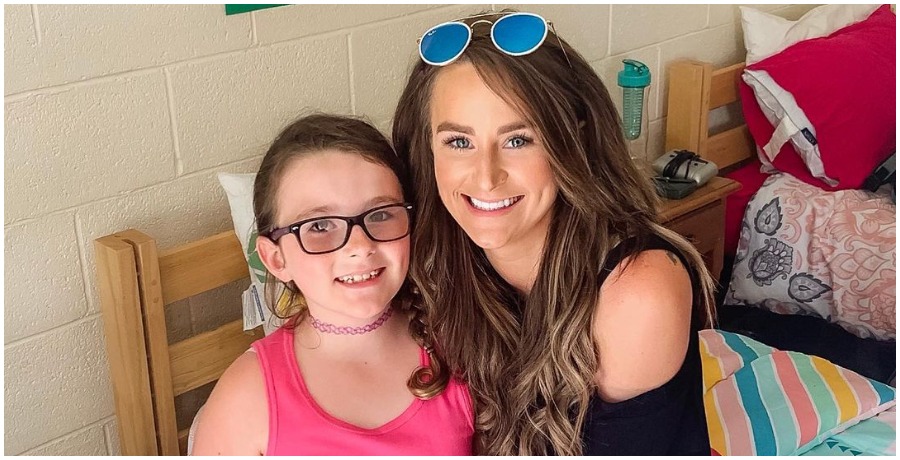 Teen Mom 2 star Leah Messer is at the center of some new rumors. Fans are speculating that the MTV personality may be pregnant with her fourth child. According to Pop Culture, some blogs are reporting that there’s a possibility of Leah adding to her brood in the near future. However, the reality star decided to speak out about the rumors shortly after they began to circulate online.

This week, Leah opted to use social media to debunk any rumors. She headed to her TikTok account to dispel the speculation. Although the Teen Mom 2 star appears to have a handle on being a single parent she’s not pregnant. Messer’s message on TikTok included a screenshot of an online article asking if she was expecting her fourth child. In the caption, Leah told fans that she was definitely “not pregnant.”

However, she continued to speak on the gossip surrounding her. She finished the statement via Instagram, where she gave her thoughts on the rumors.

Leah Messer Shares Her Opinions On The Pregnancy Rumors

“Regardless of how many years I’ve been on TV, I will never stop being amazed by some of the headlines. But honestly, why is it that everyone is so concerned with a woman’s uterus? Or assumes a woman is looking for a relationship or to have kids? Why is THAT what makes the headlines? Is that what society is accustomed to? Is that what you assume when you see a single woman?” Leah vented.

She finished her statement by telling fans that “Some women want to get married, and some women don’t. Boss up ladies, get that degree, open that business, turn down the proposal, leave the toxic relationship, be YOU and do WHAT you want to do no matter what society tells you. You don’t have to rush your timeline gorgeous. Just live a life you’re proud of! Ily.”

I don’t know where I would be without you three! 🙏🏻
I’m so blessed and beyond grateful for the life we have together! 🌸👊🏼 #HappyNationalDaughtersDay#HopeGraceFaith pic.twitter.com/ihda2fiZIM

She Advocates For Women & Mental Health

Meanwhile, Leah is currently the mother of three adorable little girls. She shares her oldest daughters, twins Ali and Aleeah, 11, with her former husband Corey Simms. She and her ex-husband Jeremy Calvert, are the parents of her youngest daughter, Adalynn, 8.

Leah has become known as a strong, single mother who has overcome a lot of issues in her life. She’s previously admitted to having an addiction to pain pills that landed her in rehab. She’s currently sober and advocates for mental health, among other issues.

While it appears that Leah Messer isn’t expecting a new addition to her family, fans can see more of her personal life on MTV’s Teen Mom 2.