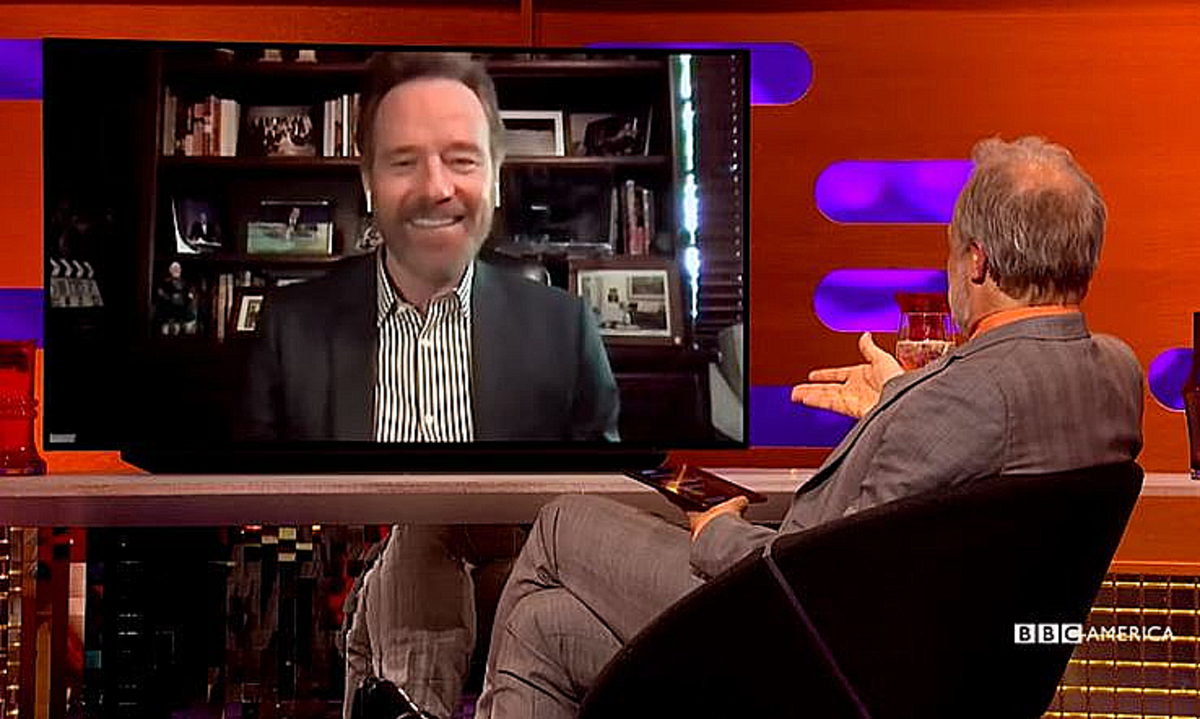 Graham Norton sets up the video chat and explains that his guest Vicky McClure shared that she does a thing with the cast members where she reads the scripts and then winds them up about things that are going to happen to their character because they haven’t read them.

This prompts the Breaking Bad star to share a funny anecdote about the actor and his costar Aaron Paul, who is called by his catchphrase of “bitch” oftentimes when seen in public.

Norton says: “And apparently you did a similar thing with Aaron Paul in Breaking Bad?

Cranston says: “Aaron Paul was supposed to only be in the first season of Breaking Bad. My character’s introduction to street-level drug dealing [was through Paul’s character] and so they were going to kill him off in the fourth or fifth episode. And I kept reading and telling him, ‘oh man, you know… one of the best things that any actor can do in cinema is a good death scene. And boy, you’ve got
a great one coming up.”

He turns and asks British actor Chiwetel Ejiofor: “…because you worked with Aaron Paul?”

Ejiofor says: “He seems all right!”

Now starring in the Your Honor miniseries for Showtime, Bryan Cranston shares with Norton and his panel of guests that he may have lost some hearing at rock concerts back in the day.

Cranston notes that he may have lost some hearing at rock concerts as he relays a frustrating experience in trying to act while wearing a face mask.

Describing shooting Your Honor, Cranston shared a story about masks and working around the mandated COVID protocols.

He says: “You know, it’s so odd because that was about exactly a year ago, right now and you know the world was much more innocent back then, and now of course, within weeks we got shut down in shooting Your Honor and had to come back seven months later to finish it.

Norton says: “So you ended up doing it all in masks and all of that?”

Cranston says: “Yes, which is terrible. I don’t know if the other actors [on the guest panel] have worked under the protocols…
but it’s difficult with the masks and the shields and you know, I am 65 years old and… I’ve been to my fair share of rock
concerts and I know I’ve lost some hearing.

He adds: “And I hear someone I’m working with— an actor —and I’m going [he shakes his head] and it’s like I have no idea what they’re saying, so…”

Graham Norton says: “Did you know that when I can’t hear someone, I take my mask off like I hear through my mouth!”

laughing at this, Cranston finishes his story: “When I was doing a play at the National Theatre a few years ago, and it was very demanding as we know doing theater, and I would shout aloud in the play.  So, I would designate one day a week where I
wouldn’t talk if it was an off day. And so I would go into a pub for lunch or something like that and they would I said [mouthes and pantomimes that he cannot talk] and I’d write a little note that I am not talking. And so then they would go [shouts loudly] ‘okay, I understand…you are not talking today,’ [He holds up imaginary sign] I’m not deaf!

Bryan Cranston stars as a judge examining his long-held convictions when his son is involved in a hit and run that embroils an organized crime family. He faces a series of tough choices and discovers how far he will go to save his son’s life.

About The Graham Norton Show

The British chat show with the affable Irish host is going strong, since 2007. The casual atmosphere and witty banter make it a celebrity favorite in the promotional rounds.

The first series began in February of 2007 airing on BBC Two and was originally slated to end on 24 May 2007 after 13 episodes. It was such a hit that it was extended for an additional six episodes, the second season kicking off October 2007.

The show made its North American premiere on BBC America back in June 2007, one week after what was supposed to be the final episode of season 1.  Then season 2 premiered on BBC America in October 2007.

The series is going strong still, and for USA fans, it airs on BBC America.