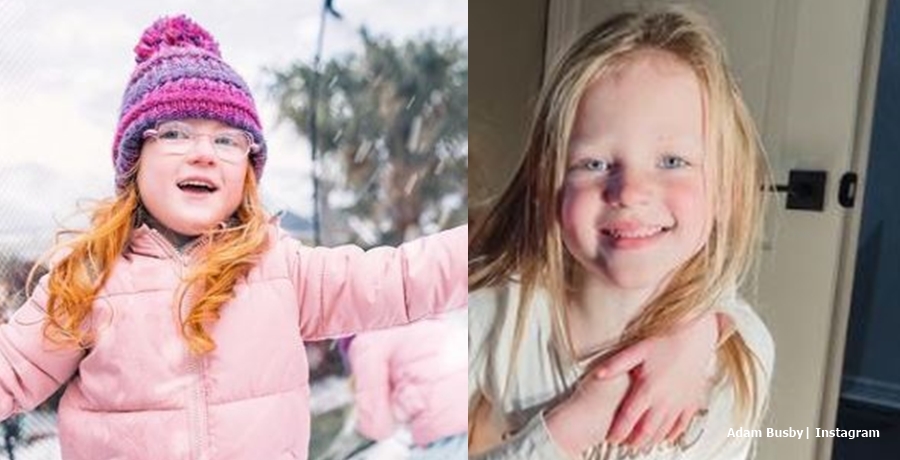 Parker & Hazel Busby like hanging out together. And Danielle described Hazel as Parker’s “baby.” Although they are the same age, Parker seems like Hazel’s big sister and she often carries her around. OutDaughtered fans like the idea of Parker sharing a special bond with her sister. They also like the two quints as it’s easy to tell them apart from the others. But the photo that Danielle shared on March 11 gave rise to some questions.

TLC fans comment every time that Adam and Danielle share photos of the twins, Ava and Olivia. Struggling to tell them apart, they try guessing which is which. But Parker is easy to tell because she has a squarer jaw than Riley and she’s the tallest of all the quints. Meanwhile, Hazel with her eyeglasses and red hair is easily identified. But fans shouldn’t worry too much about Ava and Olivia. We reported that even Parker sometimes faces difficulty with that.

The incident where Parker mixed up the twins came in TLC’s episode that featured the quints learning to ride bicycles. Parker & Hazel, Riley, Oliva, and Ava all tired out their dad. During the episode, Parker said, “Olivia, I’ll show you how to do it!” And the other quint replied, saying, “I’m not Olivia!” Well, in the latest post by Danielle, nobody needed to guess which quints featured in the picture. But some of them asked some questions.

Did Hazel get into the self-tanning lotion?

In the photo of Parker & Hazel, the two OutDaugtered kids sat side by side. They wore blue tees and leggings and looked cute with their arms around their shoulders. And fans noticed Hazel seemed dark and rather blotchy in places. Fans know the quints have a fascination for makeup. Way back in 2018, InTouch Weekly related how the girls got into mommy’s makeup bag. And they applied bright pink lipstick to themselves and other places.

Since then, fans also see the kids playing at putting makeup on Adam. So, some fans wondered if the blotchy patches and dark shade on Hazel’s face might indicate she applied some self-tanning lotion. As Parker & Hazel sat side by side, it’s easy to see that Parker doesn’t have the same dark patches. Of course, the lighting might have caused the different shade on Hazel’s face. But fans wouldn’t be surprised if she applied her own lotion.

Does Parker have an underbite?

Other OutDaughtered fans who looked at the photo of Parker & Hazel wondered if Parker has an underbite. One fan said, “does pk have an underbite?” Other fans who replied to the question agreed that it certainly looks like it. But apparently, it’s easily fixable.

One TLC follower commented on an underbite. They wrote, “I had one as a kid. A retainer, when she gets a little older, will fix that right up. Them someone who works in ortho said, “I work in Ortho… the sooner they get that looked at, the better!”

Hopefully, Danielle sees the comments on the photo she shared of Parker & Hazel. Unless they already spoke with their dentist about it and wait a little longer.