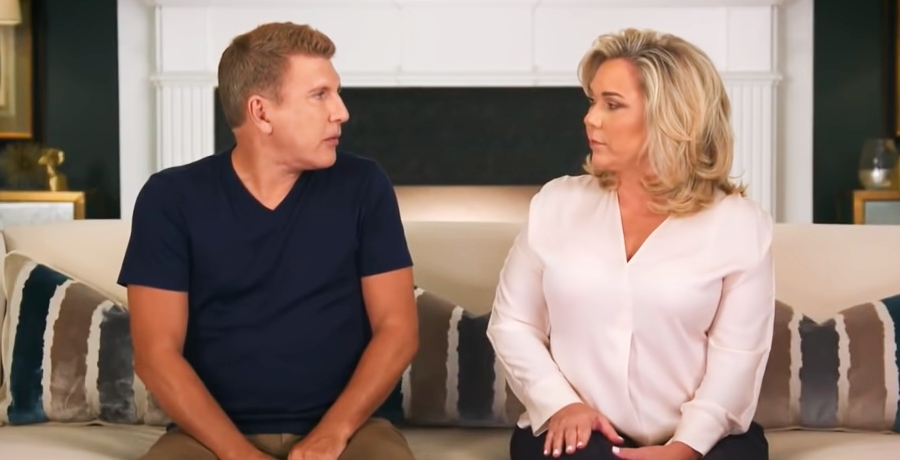 Is Todd Chrisley cheating on his wife Julie? The suspect way the Chrisley Knows Best mother recently caught Todd in a lie certainly suggested cheating was a possibility. If you haven’t seen this clip yet, you can check it out down below. Or, you can keep reading for all the details and what fans think about it.

Todd Chrisley Cheating: Did Julie Catch Him In A Lie?

Wait, did Julie Chrisley just catch her husband Todd in a lie? A short video clip from Chrisley Knows Best reveals Julie did catch Todd in a suspect situation. And, it turns out he did more or less lie to her. What did he lie about? And, why does Julie think she might’ve just caught him cheating?

Well, turns out Julie and her friend were supposed to be enjoying a girls’ weekend. Time away from the kids. And, time away from her husband. He had a trip planned anyway. But, his trip got canceled. And, Todd, being the sweet husband that he is. Well, he decided he did not want to interrupt his wife enjoying her weekend with her friend. So, he just got a hotel room for the weekend. After all, she did not plan on him being home anyway.

Here’s where things get a little hairy. He spots his wife and her friend coming into the same lobby he was sitting in. So, he slid down the couch and tried to hide behind a line of shopping backs. Fans noted he “slid down the couch like butter.” Unfortunately for him, the hiding spot wasn’t that great.

What Is In The Shopping Bags?

Now, his wife’s friend didn’t skip a beat on the accusations. She instantly called him out. Then, she investigated the shopping bags in front of him. Why did he have bags full of women’s clothing? Julie admitted she had a few questions about the situation. First of all, why was he here? Why did he lie? And, who did he buy all these women’s clothing for? Was he cheating on her?

Chrisley Knows Best fans don’t think for one minute Todd would ever cheat on his gorgeous wife Julie. They are very much in love. And, have been for a long time. He’s constantly doting about his beautiful wife on Instagram. Likewise, most fans admit he would be crazy to let such a beautiful woman (both inside and out) slip away.

One fan notes the whole thing was likely staged to add a little drama to the show. And, they don’t believe for one minute this type of thing would actually happen. Other fans remind that Todd Chrisley loves to shop. And, there are a lot of ladies in his life for him to buy clothing for including his wife, mother, Savannah, and Chloe. He’s also about to get a daughter-in-law as Kyle and Ashleigh plan to wed this year. And, we can’t forget Emmy Medders who seems to be getting pretty serious with Chase.

Is there a chance Julie Chrisley would ever catch Todd cheating on her for real? Do you think he would ever lie to her? Share your thoughts on this in the comments.

Savannah Chrisley Under Fire For Catching A Shark: Did She Release It?
‘Love After Lockup’ Spoilers: WAIT! Doug Cheated On Rachel The Whole Time?
‘Naked and Afraid of Love’: New Dating Series Coming to discovery+ in August 2021
Danielle Busby Cranks Up The Heat, Flashes Hint Of Cleavage: See Photo
‘My Hero Academia: World Heroes’ Mission’ Movie, What To Expect